I eagerly ended my four month hiatus from overnight trips in July with two trips to the Deep South.  The first was to play courses in Mississippi and Alabama with a stop in Atlanta.  The second was to play a few courses Northwest of Atlanta with stops in the Chattanooga and Nashville areas.  For the purposes of this narrative I will be combing the two trips into one.
The first stop on my trip was a course I was teased by four years ago.  Mossy Oak Golf Club is a 2016 Gil Hanse design in West Point, Mississippi.  I was in the area in the summer of 2016 playing it's sister course, Old Waverly, which is across the street.  After my round at OM I drove over to Mossy and walked around for a bit.  The course was almost ready to go and looked amazing in my brief tour around the property.
Playing the course exceeded my already lofty expectations of what I saw four years ago.  I really applaud the superintendent for having what I would consider to be the perfect maintenance meld.  Fairways that are healthy yet running, and greens that are firm yet receptive, make for an amazing day on the golf course.  I was a little intimated to play the 7200+ tips as I am not a long hitter and generally prefer something in the neighborhood of 6800 yards.  However, the course playing firm allowed me to get a sufficient amount of run if I hit the fairway and I was able to play it without having to resort to hitting fairway woods into par fours.

My second stop on Day one was the Ol' Colony Golf Complex in Tuscaloosa, Alabama.  This 2000 Jerry Pate design has a unique history as it was once a farm plantation for a mental institution called Boy's Colony.
Day two of my trip began with a round at a course whose history goes all the way back to 1903, Highland Park Golf Course in Birmingham.  The oldest course in Alabama, Highland Park was the site of a victory by Bobby Jones in the Birmingham Country Club Invitational.  In 1998 architect Bob Cupp renovated the course.  The result is a short but challenging layout that utilizes the undulations of the property to maximum effect.
Up next on day two was another course I was teased by a few years ago. I played the West course at the Country Club of Birmingham in 2015, but time did not allow me to play the East course.  Recent renovation work by architect John LaFoy was done in a Ross style to honor the original Donald Ross design.  The East was my 206th Donald Ross designed golf course played.
The third course I played on day two had me driving about forty-five minutes north of Birmingham to the town of Oneonta.  Limestone Springs is a 1999 Jerry Pate design on a hilly piece of property.  The course was in the top ten in the state of Alabama ten years ago and the core design of the course is very good.
Day three of the trip began at the Heritage Golf Links in Atlanta.  A 1996 Mike Young design, Heritage features twenty-seven holes of great variety.  Sharp edges and challenging greens made precision very important on my first tour around the course.  I played the Legacy and Tradition nines.
For my next round on day three, I headed north of Atlanta to Adairsville for a round at Barnsley Resort, a 1999 Jim Fazio design.  What made this round memorable was doing something I hadn't done in 24 years, birdie 5 holes in a row.  See scorecard below. 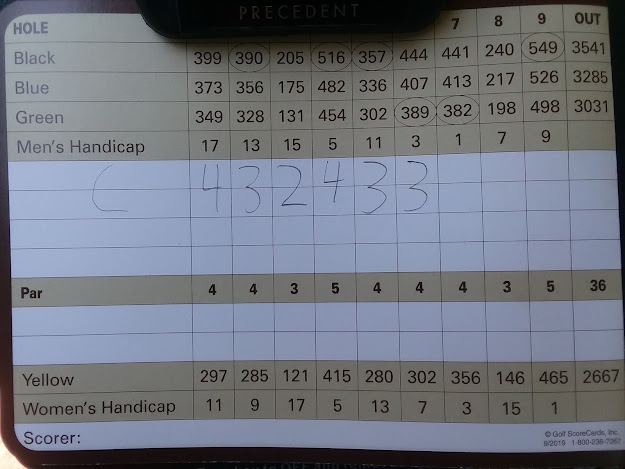 I'm not the kind of person that normally makes 5 birdies in a round, so 5 in a row is very significant.  I also did something else I'm not sure I've ever done, which is play a round where I had more birdies than pars; 8 birdies, 7 pars, 3 bogeys.  A very memorable round of golf!
Day four of the trip began at the recently renovated McLemore Club.  Formerly known as Canyon Ridge Country Club, McLemore was renovated by Bill Bergin last year and opened to great acclaim.  I have played many Bill Bergin renovations in the last few years and I can say with great certainty he does an amazing job.
Here's a little photo essay to show something very smart that McLemore did that I wish other courses with dramatic elevation changes would do.
McLemore has a par five, #6, with a dramatic drop for the 2nd shot.

It's always very difficult to figure out just how much distance to take off when hitting a shot like this so McLemore made a sign that they placed at the end of the fairway.

After a round on the big course, I took a few minutes to play the six-hole short course, which is a brilliant use of a small piece of property.  Six walking only holes under 100 yards allow you to hit a nice variety of shots.
Renovation of an existing course was the theme of day four as I headed North to the town of College Grove, Tennessee for a round at the Troubadour Golf and Field Club.    Formerly known as the Hideaway at Arrington, Troubadour was recently renovated by Tom Fazio and is the newest Discovery Land Property.
The last round of the trip was at one of the best municipal facilities in the country, Cobblestone Golf Course in Acworth, Georgia.  Designed by Ken Dye, brother of Pete, Cobblestone started life as the Boulder Course at Acworth and was later purchased by the county.
FLAGS 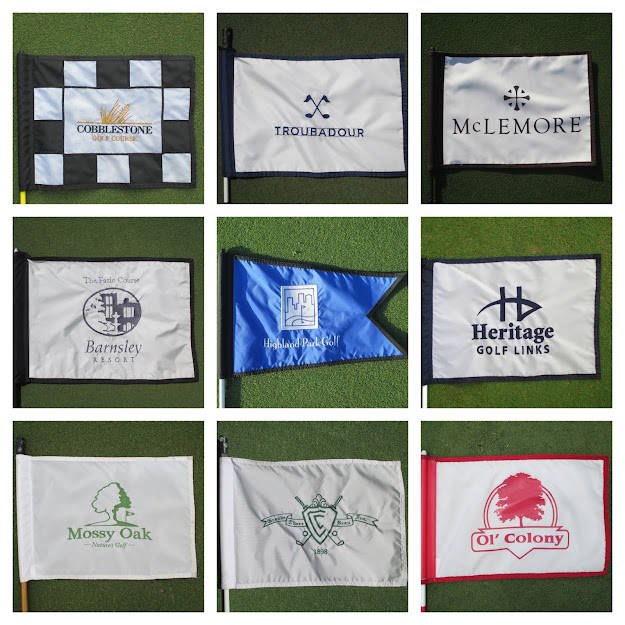 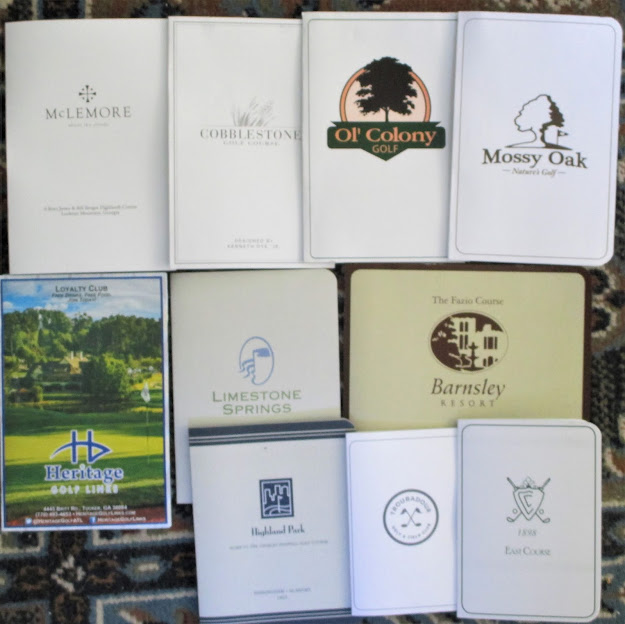