Our quest for warmer temperatures in the Winter took us to the Florida Panhandle in January where an unexpected cold snap brought us temperatures that were pretty normal for North Carolina in January!  We made the best of it and had a very good time visiting a part of the country that is still recovering from Hurricane Michael.

We drove on this trip so our first stop on the way down was at the Davis Love III designed Kinderlou Forest Golf Club in Valdosta, Georgia.  This former host of a Korn Ferry Tour event is a great tournament venue because of the extremely wide corridors around the course.  I was pleasantly surprised by the design.  The front nine is wide open and the back nine plays into the trees.
Our second stop on our first day was the highlight of the trip, Capital City Country Club in Tallahassee.  A.W. Tillinghast renovated the original nine and added nine holes to the design in the 1920's.  As usual for the architect of many of the best courses in the country, the design is very solid and is on an amazing piece of property.  The course is unlike anything in Florida and is a welcome change.
Day two of our trip began at the Hurricane ravaged Panama Country Club in Lynn Haven.  The course lost several thousand trees from Hurricane Michael and had to be rebuilt.  Unfortunately the trees were used as defining the corridors of the design and it feels a little lost without them.
Next up on day two was the exciting new concept from Davis Love III Design at Origins Golf Club.  The course can be played as a 10 hole par three course, a six hole regulation course, and also has footgolf.  I played both the 10 Hole DLIII course and the six hole Heritage course.  I made my second Hole in One on the 8th hole of the DLIII course.  118 yards with a Pitching Wedge.  My wife actually got to witness this one.  She was having surgery the day I got my first hole in one and insisted I go play golf instead of waiting in the hospital and driving the staff crazy.  She takes credit for that one and now she got to witness this one.
We finished our day at the Tom Fazio designed Camp Creek Golf Club in Panama City Beach.  This beautiful course is everything you hope for in a Fazio.  Lots of width, great scenery and a course that is very satisfying to play.
Our third day in Florida began in the Destin area at two courses that are part of the Sandestin Resort.  First up was the private Burnt Pine Golf Club designed by Rees Jones.
After a wet round at Burnt Pine we headed over to the Robert Trent Jones II designed Raven Golf Club.  I really applaud the decisions made at this course.  They had forward tees that featured yardages under 100 yards for four of the five par 3's.  This is not something you see very often and my wife was delighted because she could actually hit 8 and 9 iron off the tee instead of the usual driver or 3 wood.  She made two birdies on those par 3's, something she hasn't done in a very long time.  I really wish more courses did this for forward tee players.
Day three continued at Shark's Tooth Golf Club in Powell.   The course was the most playable Greg Norman design I have ever seen.  I particularly enjoyed the par threes.  Though sometimes long, they were all designed to give you a place to miss while still having an opportunity to make par.
For our final day in the Panhandle we headed West to Pensacola for a round at Pensacola Country Club.  Jerry Pate completely renovated this course after it sustained significant damage from Hurricane Michael.
The Jerry Pate theme continued on day four as we traveled West to Mobile for a round at The Country Club of Mobile that just completed a major renovation by Pate.  The results were very good.  He created several new holes including a delightful short par four downhill 8th hole.

We broke up the long drive home from Mobile by stopping in Atlanta to check out the new reversible nine hole Bobby Jones golf course designed by the late Bob Cupp.  We played the clockwise Magnolia course. 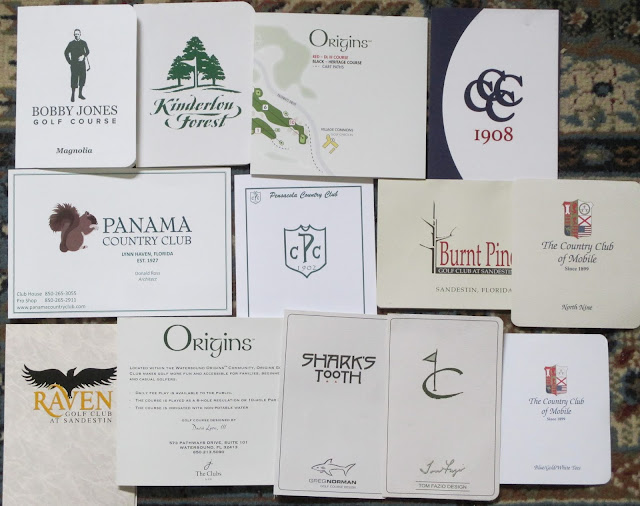 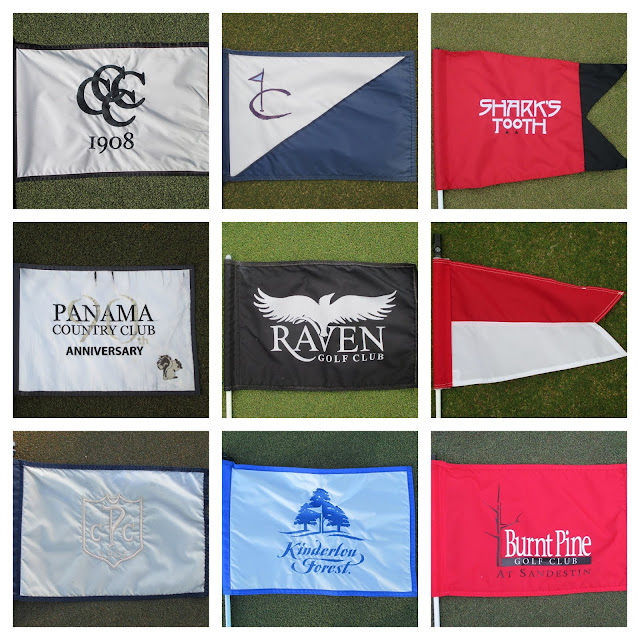 And that's a wrap on my first trip in 2020.  Special thanks to my lovely wife for being a trooper and playing in less than ideal conditions.  We went all the way to Florida to get up and play every morning in overcast conditions with temperatures in the 40's.  She never complained and actually played very well.  In five round she made six birdies, the most I have ever seen her make on a golf trip.  I can't say this enough, if you give forward tee players proper tees, it always them to have the same opportunities for birdies as lower handicap players!
at February 27, 2020