The Corona-virus has hit us all hard this year.  We have all been doing our best to figure out how to deal with this pandemic.  I chose to deal with the situation by checking out as many new public golf courses within three hours' drive of my house as I possibly could.  The courses were specifically public because pretty much all private courses, including the one where I work, were not allowing any guest play during the height of the quarantine.  My exploration focused on three specific areas- NC Mountains, Myrtle Beach, and greater Charlotte.


NC MOUNTAINS
While I have no realistic goal of playing the over 600 golf courses in NC, I would like to play every golf course in the mountains of North Carolina before I move away.  I worked in the mountains last summer and absolutely loved everything about the experience.  I have been slowly chipping away at mountain courses over the years and obviously played a significant number last summer, but I still have about 20 courses left to play before I can say that I have played them all.
Brushy Mountain
Located right off State Highway 64 in Taylorsville between Lenoir and Statesville is one of the most enjoyable hidden gems I have played in the state of NC.  Brushy Mountain was designed by William B. Lewis and opened its doors in 1964.  Even though the course has removed and reduced bunkers over the years, the routing is still something to be seen.  It makes great use of the very undulating property and makes for a really fun round of golf!

Cedar Rock
Cedar Rock is located just northeast of Lenoir and was once rated as one of the 100 Greatest Courses in the country by Golf Digest in the 1970's. Designed by Ellis Maples, the king of NC golf design, Cedar Rock illustrates what Ellis did so well.  He built a course that is restrained in its use of bunkers and relies on the property to create challenge.  The front nine goes up and down the mountain while the back nine is laid in flatter ground.


Hemlock
Walnut Cove is where the sub-6000 yard Hemlock golf courses can be found.  Another 1960's creation, this one by Orell Robertson, Hemlock relies on its small greens and tight fairways.  It is surprisingly challenging for a 5700 yard course.

Lake Hickory
My wife and I played the nine-hole Town course at Lake Hickory Country Club last year, so we were very excited to play the twenty-seven hole Catawba Springs course this year.  Located just north of Hickory, the course features three nines, Dogwood, Sulphur Springs, and Fox Run.  All designed by William Byrd in the 1960's.

Pilot Knob Park Golf Course
Located in the shadow of Pilot Mountain State Park, the golf course at Pilot Knob was designed by Gene Hamm.  The views of Pilot Mountain are spectacular and the routing flows gently up and down the hills, providing a strong test with dramatic changes in elevation.

Stonewall
Stonewall golf course in Germanton is the definition of a quirky golf course.  Case in point, the par three 8th hole, where I will use the pictures below to tell the story of one of the most unique holes I have ever played. 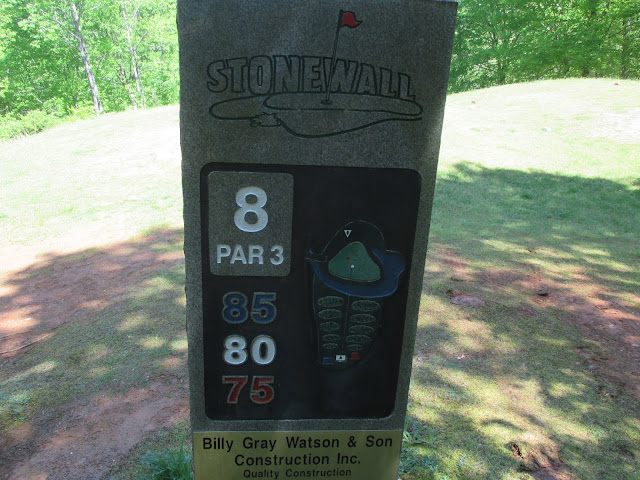 So you see this sign and you're thinking, this shouldn't be too hard.  The shot might not be hard but getting yourself to the green will be. 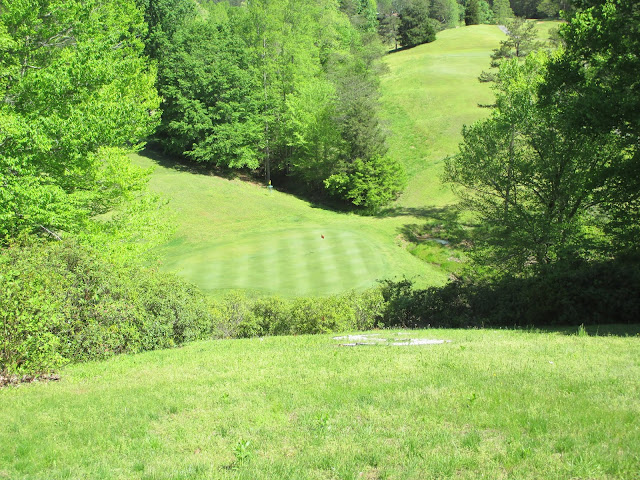 Only 85 yards and a beautiful drop shot at that.  This hole should be a piece of cake.  Only problem is: 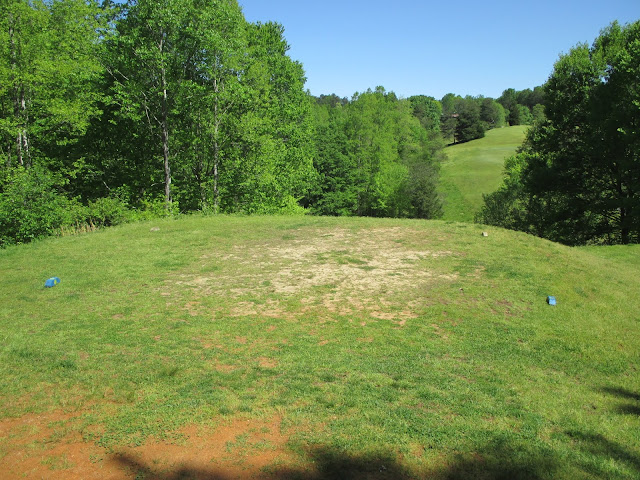 This is your view from the tee.  That's right, it's a BLIND drop shot, 85 yard par three! 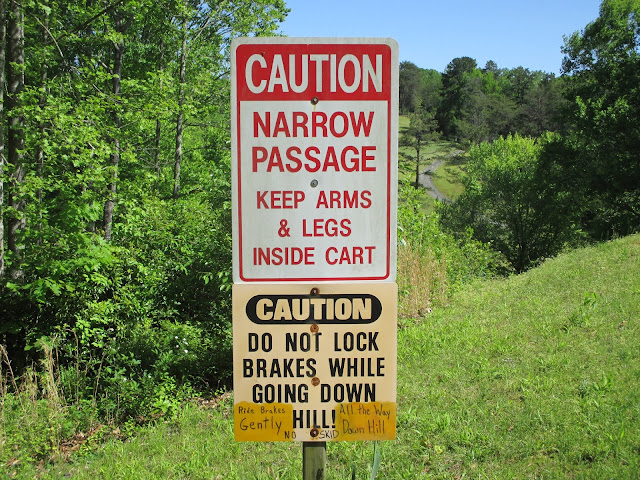 Once you hit your short wedge shot down the hill, the fun really begins, because you might end up lying face down in the forest if you're not careful.  The cart path down is so steep and slippery that the owner specifically tells you about it when you check in.  He warns you very clearly to not lock up your brakes as you will skid and likely fall out of the cart and into the gorge.  I saw him during my round and while discussing the 8th hole he said they've had to call the ambulance "several" times!!! 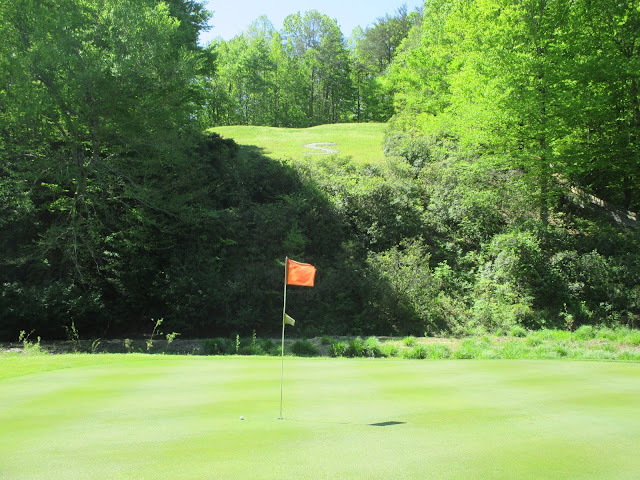 Looking back up from the green at one of the wildest par threes I have ever seen!

MYRTLE BEACH AREA
I started taking trips to the Myrtle Beach area with my father way back in the early 90's.  With at one time over 100 courses in a 50 mile long area from Pawleys Island to Southport, Myrtle Beach has long claimed to be the Home of Golf.  I have made sporadic trips to the area over the years with my wife and some occasional buddy trips ,but I was still lacking some of the top-ranked courses in Myrtle from the list Golf Digest did that ranked the top 50 courses in the area.  I resolved to do something about that during the virus.

Arcadian Shores
Arcadian Shores is a 1974 Rees Jones design that was at one time in the Golf Digest top 100.  What is really exciting and unique about the course is what you see below: 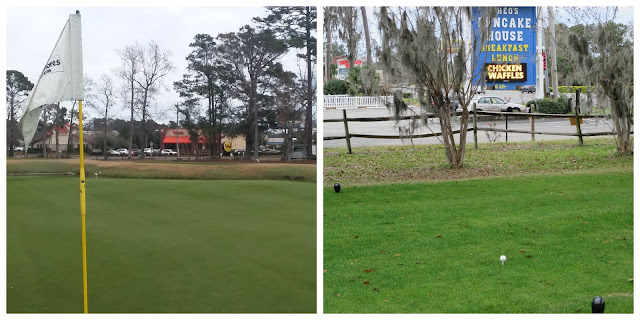 Arcadian Shores is the only course I have played where you can quite literally get Bojangles on the third tee box and Chicken and Waffles on the 7th Tee Box.  This might be the one course where I wouldn't mind a bit of a backup on each tee!

A late-comer to the Myrtle Beach golf scene, Crow Creek opened in the year 2000 and was designed by Rick Robbins.  The Crow theme is very strong throughout the course.

Nicknamed the Granddaddy, Pine Lakes was the first course built in the Myrtle Beach area.  It opened in 1927 and was designed by Robert White, the first President of the PGA of America.
Prestwick

One of only two Pete & P.B. Dye designs in the greater Myrtle Beach area, Prestwick is everything you love or hate about the Dyes.  Severe greens that require precision, lots of visual intimidation, and at its heart a very good course.

One of the earliest courses to arrive in Myrtle Beach, the Surf Club is a 1960 George Cobb design.  Surf is one of the few mostly private courses in the area.

One of the few twenty-seven hole courses in the area, Thistle was designed by local architect Tim Cate and has a Scottish theme in its clubhouse and course presentation.  The nines are named Cameron, MacKay, and Stewart.
The Witch

One of many Dan Maples designed courses in the area, The Witch is one of Dan's best.  The front nine is mostly in a swamp and will give you plenty of opportunities to interact with Alligators.

CHARLOTTE/GREENSBORO AREA
When I needed a break from spending long hours in the car I made relatively short drives to courses in the local area that I had yet to play.  I was pleasantly surprised by what I found.

Deep Springs is located in Stoneville and is yet another very solid Ellis Maples design from the 1970's.

The Town of Maiden is where Glen Oaks Country Club lies.  A 1967 Bill McRee design with a solid course that has one of the more unique routings I have played.  To get to the first tee you drive across two fairways.  To get to the par-three fifth hole you drive backwards down the entire par-five 6th hole.
Lincoln

Peter Tufts of the Pinehurst Tufts family designed the back nine of Lincoln in the 1940's.  The front nine was added in the last twenty years.  The result is one of the more unique routings in North Carolina.  After you play the first two holes, you take a tunnel under Highway 321 and emerge in the forest to play holes three through nine.  The return trip back to the clubhouse and the 10th hole is over a mile.
Pudding Ridge

A 1994 design, Pudding Ridge gets its name from of all things, the Revolutionary War. On February 6, 1781, English General Cornwallis traversed this site. Tradition has it that the consistency of the mud so reminded him of English pudding, that he named the hill Pudding Ridge, a name that has survived for over two hundred years.
Tanglewood Park

Many years after playing the Championship course at Tanglewood Park in Clemmons, I finally made it out to play the Reynolds course.  Both courses were designed by Robert Trent Jones.  The Reynolds has the much more interesting piece of property, and with a proper renovation that I'm sure will never happen, it could be one of the best public courses in the state.

Revival at the Crescent

The Revival is a 1994 John Fought design with some interesting topography, but is also in desperate need of a chainsaw in places.