With the knowledge that my summer was going to be busy with work and therefore no time for trips with my wife, I started looking at possible destinations for a quick weekend trip to somewhere new and fun.  I arrived at Pittsburgh because my wife and I love visiting new baseball stadiums and Pittsburgh has one of the best.  Oh yeah, the golf is pretty good too!  This trip focused on the less well known courses in the area and not the ones everybody has heard about, Oakmont and Fox Chapel.  Even though we had to deal with some early season aerification and a little rain, we still had an amazing trip and we can't wait to get back for another Pirates game and some more top notch golf.


Our first destination in the Pittsburgh area was St. Clair Country Club.  We began our trip with the Championship course designed by William & David Gordon in 1954.  The Gordons designed many courses on rolling topography in Pennsylvania and their skill at creating a great course on this type of land is on full display at St. Clair.  The course was aerified the day before we played so please excuse the quality of the greens in the photos.  St. Clair really blew me away and I think it is very underrated in the state of Pennsylvania.

With some time to kill before our baseball game we headed over to the Terrace Nine at St. Clair.  This fun little nine hole course is what is left of the original Tom Bendelow course at St. Clair that was built in 1916.

We finished our first day in Pittsburgh with a game at PNC Park, one of the best ball parks in all of baseball.  I loved everything about the experience at PNC.  After the easy parking across the river we walked over the Clemente bridge and took in the amazing views from everywhere in the ball bark.  Our seats were about fifteen rows up behind home plate and were less than $50.  To add more to the experience it was dollar dog night!  Hot dogs never taste better than at the ball park!  If you are a baseball fan, you must visit PNC Park.


Our sixty-three hole day two began with one of the best "hidden gems" I have ever played, Allegheny Country Club.  Allegheny started its life in 1902 with a Tom Bendelow design.  Donald Ross subsequently re-designed the entire course in the 1930's.  Gil Hanse did a sympathetic restoration in the early 2000's.  What is in the ground now is one of the most fun and interesting golf courses on the East coast.  Every hole is unique and fun plus how often can you play golf with a large group of horses and hounds crossing your path?


Less than five miles from our first destination, our next course on day two was Sewickley Heights Golf Club.  Designed in 1961 by Jim Harrison, the Heights is another example of a solid course that uses the topography to create a good variety of up and down holes.  The course is on three different pieces of property and the architect did well making it a seamless routing.


The third course of our tremendous Saturday in the Western Hills of Pittsburgh was at the Pete & P.B. Dye designed Montour Heights Country Club.  Opening in 1987, this course is everything you love or hate about Dye designs.  It's severe, demanding, artistic, and always a ton of fun.

After 54 holes of Championship golf, my wife and I played the "Championship" Par 3 course at Scally's Golf Center.  Championship is in quotes because Scally's also has a pitch and putt course where every hole is less than 50 yards.  I applaud them so much for having the P&P and I really wish more places did.  It is the best way to introduce kids to golf.  Let them have some success early on and you can hook them for life.

So the below image is a good example of a picture telling a story.  After playing two holes with nobody in front of us, my wife and I played behind two kids playing a match against each other for the rest of the round.  It was a very interesting experience observing this match.  Ok, actually it was a horrible experience, here's why:
1.  There was nobody in front of them and they refused to let us through. The three parents with the kids knew we were faster yet they never let us through.  Fine example for your young children.
2.  The parents were carrying the kids bags.  In my long junior career, my parents never carried my bag once.  Not even to the car after a long day!  The entitlement we are giving our children makes me weep.
3.  The kids never conceded a putt.  They were playing match play and neither child, boy or girl, conceded a putt.  Again, what are these parents teaching the kids about good sportsmanship when you are forcing a kid to putt a 6 inch putt!
Believe it or not, this story doesn't end at the golf course.  We went to Five Guys for dinner and ran into one of the kids and his parents on our way out.  The mother clearly recognized my wife from her purple shirt and apologized for making us wait.  I walked away because I would not have been very nice in my response, and the father was much bigger than me so I took the path of least resistance.  My classy wife said no problem and told the son he had a very good swing.  His parents had to make him say "Thank you"  Based on everything you've just heard, are you surprised?
The last day of our trip began at the Donald Ross designed Green Oaks Country Club in Verona.  The 1914 design features a rather unique back nine with three of the last five holes being difficult 200+ yard par threes including back to back par threes at 16 and 17.  I bogeyed the first two and channeled some of my frustrations on the third by chipping in for birdie.

The last round of our wonderful trip to Pittsburgh was the Donald Ross designed Edgewood Country Club.  Built in 1922, the course features a wonderfully rolling piece of property with the clubhouse sitting at the highest point on the property. 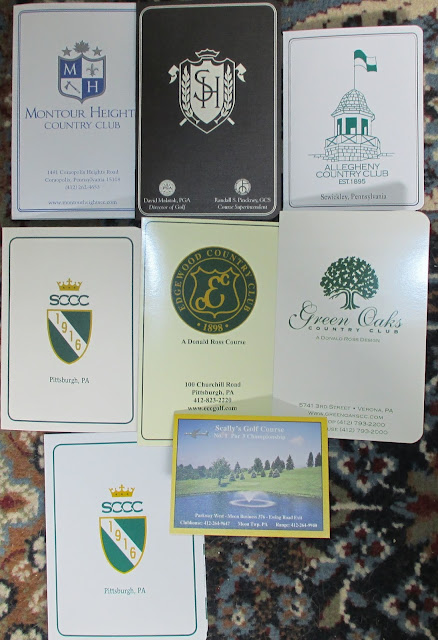 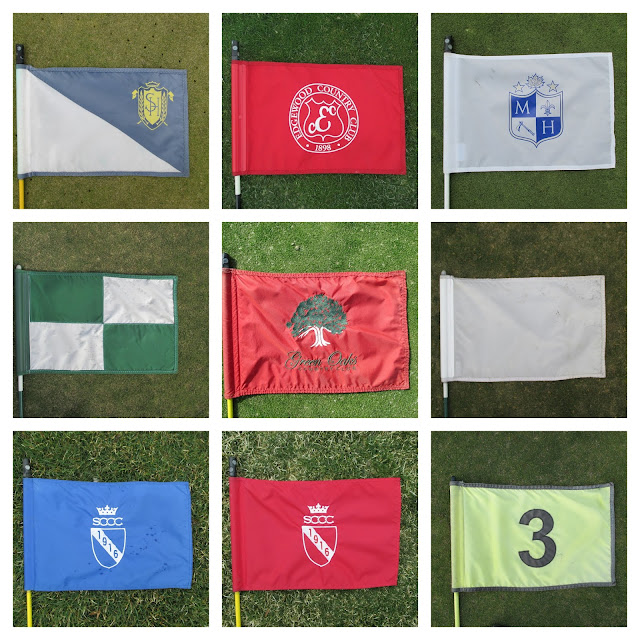