Middle and Western Tennessee has been a mostly undiscovered area of the country for my golf travels.  I decided to remedy that in April and had a great time playing many of the best courses in Memphis and Nashville.  I added a couple courses from the Donald Ross list and played a soon to be World Golf Championship venue.


Day one began at the Hermitage Golf Course in Old Hickory and it's President's Reserve course.  Designed by Denis Griffiths in 2000, the course takes its name from the nearby Hermitage, home of President Andrew Jackson.

Next up on the first day of the trip was the other high-end public course in the Nashville area, Gaylord Springs Golf Links.  Right around the corner from Opryland, this course was designed by Larry Nelson and Jeff Brauer in 1991 and hosted a Champions Tour event for several years.

The third and fourth courses on day one were inspired by my quest to play every golf course designed by Donald Ross.  Vinnylinks is a nine hole par three course that was designed on top of an old Donald Ross course and retains some of the original greens so technically it's still a Ross course in some form.

A mere two miles from Vinnylinks, Shelby golf course is a 1924 Ross design on a very up and down piece of property.

Day two and three of my trip were spent in the Memphis area.  The long-time PGA Tour host, TPC Southwind was first up on day two.  This 1991 Ron Prichard design has hosted the St. Jude Classic for many years and this year will host a World Golf Championship in July.

The Donald Ross designed Memphis Country Club was next up on day two.  Although a relatively flat piece of property, the course makes tremendous use of the little undulation it has to provide exceptional variety.

A mere three miles from Memphis CC, my next destination on day two was Chickasaw Country Club.  This William Langford design was just restored by architect Bill Bergin.

Day three began at the top hundred ranked Spring Creek Ranch in Collierville.  A modern masterpiece from Jack Nicklaus, Spring Creek has a very uniquely designed clubhouse with lots of glass and long rectangular spaces.  This National membership club is a great place to spend a long weekend.

The second course I played on Day three was perhaps the most famous course on the trip.  The South course at Colonial Country Club was where Al Geiberger shot the first 59 in PGA Tour History.  Colonial fully embraces its place in history and even went so far as to put Geiberger's round on the scorecard so you can see how you're doing compared to him. I overachieved and made it to 59 strokes in only 15 holes!


I concluded day three with a pit stop on the drive back to Nashville to play Jackson Country Club.  A 1914 design that is a frequent of host of Tennessee Amateur events, Jackson is on a relatively flat piece of property but gets the most out of its space.


On day four I stopped at Fairfield Glade where they have five outstanding public courses that are all part of the Fairfield Glade retirement community.  I played the highly ranked Stonehenge Golf Club designed by Joe Lee. 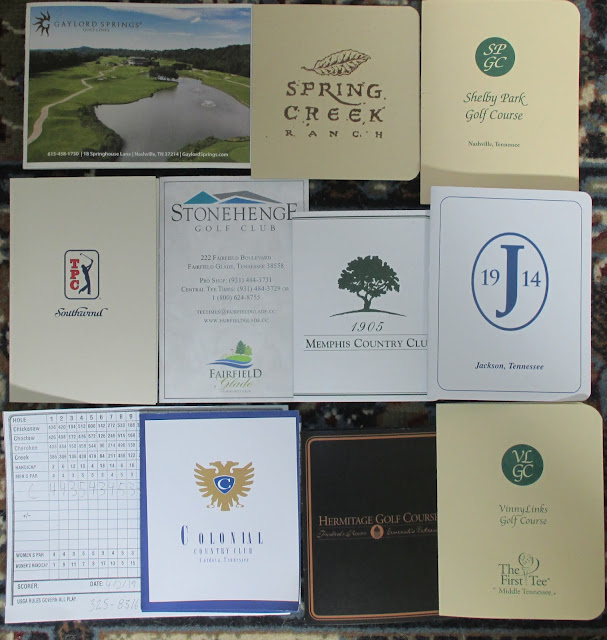