In August of 2017 one of my good friends invited me to play in the Renaissance Cup with him.  The Renaissance Cup is an event put on by Tom Doak at courses that he designed.  He picks a different course every year and in 2017 he held the event at a new course that was designed by his associates called Stoatin Brae near Battle Creek, Michigan.  I was honored to be invited to play in the event and we planned a trip around the gathering at Stoatin Brae.  We drove to Michigan and back and made several stops along the way to play some great golf.  What follows is a review of our very enjoyable trip to The Renaissance Cup.

After an eight hour drive our first stop on the trip was Columbus Country Club in Columbus, Ohio.  We started with Columbus' wonderful par 3 course where they are doing something I am a very big fan of.  Every hole features a regulation size hole and a large hole.  I don't know why more courses don't do this.  It was a lot of fun playing to the big holes and playing a game where the winner of the previous hole got to decide which hole we were going for. 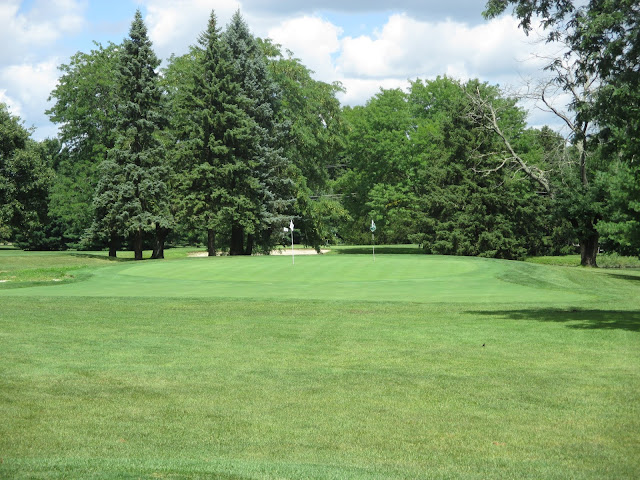 After a fun warm up on the Par 3 course we proceded to the regulation course at Columbus.  Columbus Country Club has at least nine holes of Donald Ross.  The order of holes has changed over the years, the current 1-3 were 16-18 at one point.  The course was in a state of transition in 2017 with the front nine having already been renovated by Keith Foster with the back nine due to begin in the late fall.  Keith does great work as we will see again on this trip and we were very impressed with the front nine and enjoyed discussing what possible changes he would make to the back nine.


Day 2 of our trip began with possibly the best nine hole course in the country, Culver Academics, in Culver, Indiana.  Culver was lovingly restored to the original Langford/Moreau design by Bobby Weed.  The result is one of the most fun and interesting golf courses I've played.

Day two of the trip continued at the wonderful Coore & Crenshaw designed Warren Course at Notre Dame.  My buddy and I are both big fans of C&C and were very excited to play Warren.  I was very impressed with how C&C took a very bland, tight site and turned it into a very good golf course.  One funny note about The Warren Course.  We were paired with a woman from the Notre Dame Golf Team.  It was move-in weekend for students, so when she met us she asked if we were here for move-in weekend.  After we got in our cart I asked my buddy "Do we look old enough to have a kid in college?"  To which my buddy responded "Does she think we're a couple?"


Our third round on day two was at Signal Point Club just across the border from Indiana in Niles, Michigan.  Signal Point is a 9 hole course with an interesting setup.  They have two flags on every hole, red & white, and tees that correspond, red & white.  You play the white tees to the white flags for the front nine and the red tees to the red flags on the back nine.  Great idea to make a 9 hole course play and feel like an 18 hole course.


Day three of our trip began with Battle Creek Country Club in Battle Creek, Michigan.  Battle Creek is a Willie Park Jr design being slowly restored by Bruce Hepner.  Bruce visits the club every year and they are slowly implementing his master plan and restoring the course.  The Willie Park Jr greens make this course a real hidden gem when it comes to golf in Michigan.


After our morning round at Battle Creek we headed over to Stoatin Brae for our practice round for the Renassiance Cup.  Stoatin Brae was designed by Tom Doak's associates Eric Iverson, Don Placek, Brian Slawnik, and Brian Schneider.  I was amazed how humble these guys were when I met them.  None of them like taking credit for anything and are quick to say "that hole was ______'s idea", "______ came up with the routing"  They obviously worked very well together to create a wonderful course that is sure to appear on the various Top 100 public course lists soon.

The format of the Renaissance Cup was single elimination match play, better ball of partners, 9 hole matches.  We won our first match pretty easily but I struggled early on in our second match and my partner did his best to keep us in the match.  We were two down with two holes to play but we still had a chance.  Because of the tight schedule, there was a rule for the tournament that in the event of a tie, the team that won the most recent hole was declared the winner.  Our final charge began on the par 3 17th hole with my partner curling a drawing 7-iron 30 feet behind the flag. I asked him if I perhaps had too much club to which he responded “No, my adrenaline is flowing.” This lead to me hitting it to five feet.  Picture of 17 below:
After I made the birdie putt we went to the par five 18th hole still with a chance to win the match.  The 18th was playing down wind and with the help of two great shots I was able to get to the front of the green in two.  I had about 40 feet for Eagle.  I took longer than anytime in my life to look at this putt,  My partner looked at it, we agreed on a line and I was able to cozy it up to about a foot.  After our opponents missed their birdie putts, we won a dramatic match.  We subsequently lost the third match in a great battle that ended up on the final hole but our long day was a ton of fun.

After a relaxing day playing more golf at Stoatin Brae, we headed back South for what would become a glorious 54 hole day of golf that began with a course that I already loved and was made even better by a great renovation by Keith Foster, Moraine Country Club in Kettering, Ohio.


Our second round of the day was at a Donald Ross course in Dayton, Miami Valley Golf Club.  Miami Valley obviously hadn't retained as much of the original Ross course as some others, but it still had the trademark great routing and wonderful greens.


Pace of play was so good at Miami Valley we found ourselves with most of the afternoon to kill.  We didn't have a third round planned but since I had teased my buddy when we were at Moraine by having him walk up the hill behind the 5th hole at Moraine to look at the 2nd & 3rd holes at NCR South, it seemed appropriate to give them a call.  We were in luck and were able to play the South course at NCR Country Club.  Both courses at NCR are Dick Wilson designs.  I had last played the South course in 2006 and while I thought it was decent I wasn't particularly impressed.  I am very glad I got another opportunity to play it.  They had clearly done a renovation in the past few years and the results were spectacular.  I loved the course and especially what they did with the bunkers.


The last day of our trip presented us with a favorite course of mine that I hadn't seen in 14 years, Camargo Club in Indian Hill, Ohio.  Camargo was masterfully designed by Seth Raynor and has the best collection of template par 3's(Short, Redan, Eden, Biarritz) that I have ever played.  There is a better example of each somewhere else but as a collection they can't be beat.

The Renaissance Cup was a tremendous experience and I hope to play in another one in the future.  Tom Doak has a very special group of associates that love their work.
at August 01, 2018