Sometimes the trips that I take straddle the fine line between relaxing vacation and extremely stressful quest to play golf courses.  The ultimate example of this is the trip my wife and I took in 2016.  We started and finished the trip in Denver, but in between we drove almost 2500 miles, played golf in seven states in seven days, and spent over 40 hours in the car.  See our route below: 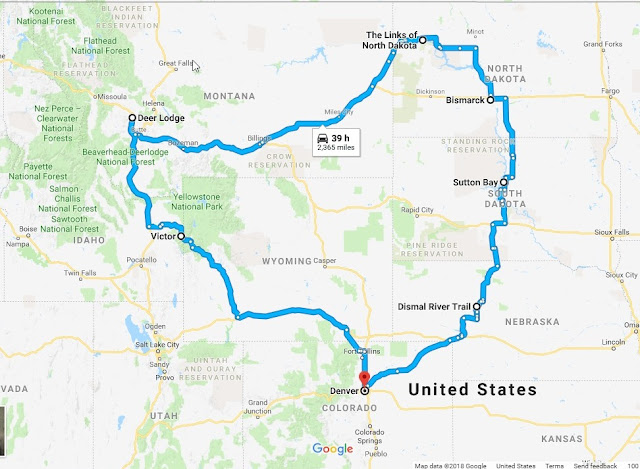 I am very lucky to be married to the greatest woman in the world.  She has a tremendous sense of adventure and complete trust in her sometimes insane husband.  When I pitched this trip to her as a once in a lifetime experience, she was happy to do it.  Because she is a saint, she waited until the very end of the trip to tell me that nine hours in the car in one day is not something she wanted to do again (we had two days with 9+ hours in the car.)

After landing in Denver, our adventure began at Castle Pines Golf Club in Castle Rock, Colorado.  Castle Pines was designed in the early 80's by Jack Nicklaus.  I am generally not a fan of Nicklaus designs but wanted to play this course because I had heard about recent renovations undertaken to make the course more playable.  The two assistant professionals I played with did a very good job of pointing out the changes that were made.  I enjoyed the course and applaud it for taking steps to make it more enjoyable for all. 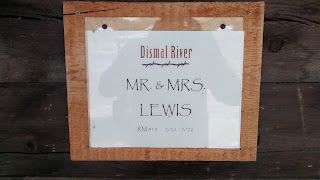 After finishing at Castle Pines, my wife and I undertook a six hour drive in the dark to reach our next destination, The Dismal River Club in Mullen, Nebraska.  I had previously visited Dismal in 2012 when I played in a tournament called The 5th Major set up by a friend.  We played the original Nicklaus course for three days and received a tour of the new Doak course under construction by Tom Doak himself.  I was finally returning to Dismal to see the finished product.  To summarize how I feel about the Doak course at Dismal, I will say that I have played 1400+ courses so far and I have Dismal Red (Doak) as the 13th best golf course I have ever played.


After an early morning round at Dismal, we made the five hour drive to Sutton Bay in Agar, South Dakota.  We made a pit stop along the way for a quick nine holes at Dunes Golf Course in Fort Pierre, South Dakota.  Dunes is an executive course and served as a nice relaxing walk.
We arrived at Sutton Bay in the late afternoon, giving us enough time to take a trip around the newly built Par 3 course.  The Par 3 course at Sutton was fun and a perfect accompaniment to the big course. 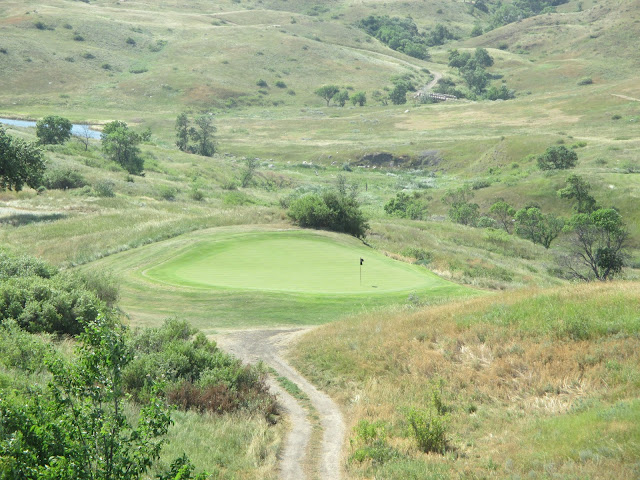 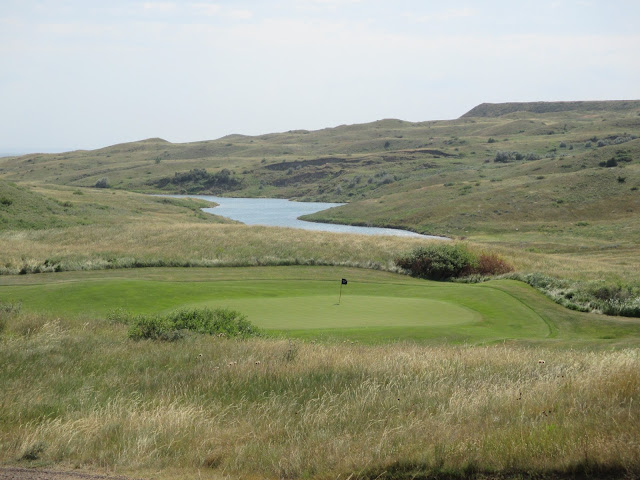 After a wonderful dinner at the lodge at Sutton Bay we retired to our room excited to tackle the big course in the morning.


After an enjoyable early morning round at Sutton Bay, we made the three-hour drive to Bismark, North Dakota and a round at Hawktree Golf Club.  Hawktree is a Jim Engh design and is one of his best courses in my opinion.  With that being said you are still left shaking your head on several holes.  My advice when playing any Jim Engh course is don't keep score and have a sense of humor and you'll be fine.

We headed north after our round and spent the night in New Town, North Dakota.  The following morning we were treated to the biggest surprise of the trip, The Links of North Dakota in Ray, ND.  The Links was designed by Stephen Kay and is widely considered his best course.  The site for the golf course is amazing and Kay did a great job of routing the course over the land.  Links at North Dakota is easily in the Top 50 public courses in the country but because of it's location, it doesn't get the respect or attention it deserves.


When we finished our morning round at The Links we embarked on a scenic nine hour drive across the state of Montana where we spent the night in Butte, Montana.  We were in the area to play another Tom Doak course that is one of the best courses in the country, Rock Creek Cattle Company in Deer Lodge, Montana.  Rock Creek is simply perfection for a destination club.  From the eight mile long entrance drive, to the clubhouse and golf shop, to the course, everything is exactly what you want it to be.  The hardest decision I had to make after this trip was deciding whether I liked Dismal Red or Rock Creek better.  I gave the very slight edge to Dismal but Rock Creek is still in my top 30 courses played.

After an amazing morning at Rock Creek, we made the five hour drive to Driggs, Idaho for an afternoon round at Huntsman Springs.  Huntsman was designed by David McLlay Kidd.  Mr. Kidd does something I really wish more modern designs would do, which is that he puts great thought into his forward tees and does a great job at creating tees at shorter yardages that allow the higher handicap player to enjoy the course.  My wife found several par 3's under 100 yards, several par 4's under 250 yards and a par 5 under 350 yard where she could actually hit wedge into the green for her third shot.  I have played other courses where Mr. Kidd does this and I can't thank him enough for allowing the less skilled player an opportunity to play real golf.

We spent the night in Victor, Idaho and the next morning we made the short 40 minute drive over the mountain to Jackson Hole hole for a full day of golf and other adventures.  Our first stop of the day was Shooting Star Golf Club designed by Tom Fazio.  I've played almost 100 courses designed by Tom Fazio and I can confidently say the man knows how to build pretty courses.


After our round at Shooting Star we headed across the street to Jackson Hole Resort and took the aerial tram ride for a bird's eye view of Grand Teton:
Our second round on day six was at 3 Creek Ranch in Jackson, Wyoming.  3 Creek Ranch is a Rees Jones design with his typical style of bunkering.  Even though I'm not fond of his repetitive bunkering, I did enjoy the great variety of par 3's and 4's.


Day seven of the trip brought us to Snake River Sporting Club in Jackson, Wyoming for our final round of golf.  Snake River was expertly designed by Tom Weiskopf and is by far the best golf course in Wyoming.  Snake River sits next to a national forest and the setting along the river is perfect for golf.  The staff is one of the nicest and most welcoming you will ever find at a golf course.

After our round we made our second nine hour drive of the trip, back to Denver for our flight home in the morning.  As I sit here almost two years later reflecting on this crazy trip, I am very glad to have experienced it.  We played golf in five new states and I added two courses to my top 30.
at July 16, 2018