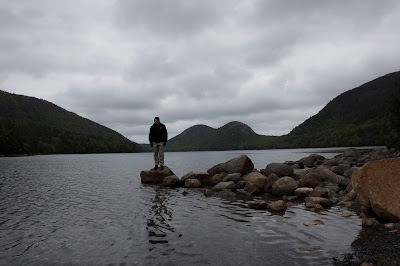 My wife and I decided to head to the last state in the continental 48 that I have not played golf in, Maine, for our annual big adventure trip.  We designed the trip around visits to the top courses in Maine and New Hampshire and some little known Ross courses.  We also made a mandatory visit to Acadia National Park (seen above).  As always the trip was amazing and we hope to get back again soon.

Following a nice warm-up round at Bethlehem, we made the one-mile drive to Maplewood Resort for another fun public Ross course.  The current routing is clearly not Ross as I doubt he would have featured a par 5 followed by a par 6!


In keeping with the Ross theme our second course on day two was Lake Kezar Country Club in Lowell, Maine.  Lake Kezar has nine holes of Ross, luckily the front nine, as we were short on time and only had time for nine holes.

The third course on day two was our first "modern" course of the trip, Sunday River Golf Club in Newry, Maine designed by Robert Trent Jones, Jr.  Of the big three Maine public courses (Sunday, Sugarloaf, Belgrade) I enjoyed Sunday River the most.  It was a mountain course that wasn't too severe and the views were amazing as you would expect.


After a brisk morning round in the mountains we made our way back toward the coast for a stop at Belgrade Lakes Golf Club, a 1998 Clive Clark design in Belgrade, Maine. 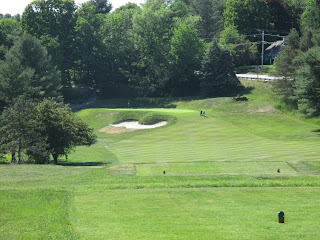 Since one of my goals for this trip was to play every Donald Ross course I could, a stop at nearby Augusta Country Club in Manchester, Maine was mandatory for our third round on day three.  Augusta features nine holes of Donald Ross and nine holes of Stiles & Van Kleek.  Due to time constraints, I only had time to play the Ross back nine which was a shame because the first hole looked very enticing -see to the right>>>>>>>>>>>>>>>>>>>>>>>>>>>>>>>

After an overnight stay in Bar Harbor, our fourth day began at Kebo Valley Golf Club in Bar Harbor, Maine.  Kebo is the oldest club in Maine, established in 1888 and is one of the three best courses in Maine in my opinion.


After our round at Kebo we began our exploration of Acadia National Park.


Following some amazing hiking in Acadia, we made the short drive to Northeast Harbor Golf Club.  Northeast Harbor's original nine was designed by Arthur Lockwood with the other nine holes designed by Herbert Strong a few years later.  Northeast had one of the best natural routings I have ever seen, which is truly impressive when you realize it was completed almost a hundred years ago.


Following a great day of golf and hiking in Acadia, we made a two-and-a-half hour drive to our hotel in Freeport, Maine where we would be staying the rest of the trip.  Day five of the trip started with the Arnold Palmer designed Golf Club of New England in Stratham, New Hampshire. The course featured one of the best sets of par 3's in New England.


Day five continued at Wentworth-By-The-Sea Country Club which features a handful of holes designed by Donald Ross and contributions from many other architects.


That concludes part one of our Maine trip review.  In part two we will see some more wonderful Ross courses, some old classics and a few modern courses to round out our adventure.
at June 14, 2018