One of my many goals in golf is to play every golf course designed by Donald Ross.  Mr. Ross designed approximately 375 golf courses.  I'm currently at 148 courses played so I have a ways to go.  In order to accomplish this goal I will be taking several short trip to New England, Ohio, and Michigan.  I just returned from one of these trips where I played nine Ross courses in four days.  It was a wonderful trip and I was privileged to see a nice variety of courses from the greatest golf architect of all time.

The trip began at Longmeadow Country Club in Longmeadow, Massachusetts.  Longmeadow is a 1922 Donald Ross design.  Longmeadow is one of the hardest Ross courses with a large number of 420+ yard par 4's.  Recent tree removal has really improved the site lines and vistas on the course. 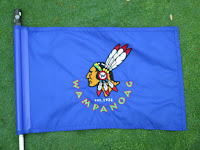 After Longmeadow, I made the 45 minute drive down to Hartford, Connecticut to play Wampanoag.  Wampanoag is a 1924 Donald Ross design that doesn't get the attention that nearby Hartford Golf Club does.  The course has very good bones and could be really great with a proper restoration.

Day two of the trip began at Shennecossett Golf Course in Groton, Connecticut.  Shennecossett is a 1916 Donald Ross municipal course that sold the property containing the original 5th to 7th holes in 1997.  They hired Mark Mungeam to design three new holes near the water.  You will not be seeing pictures of those holes as I prefer to focus on the Ross holes

Day two continued at another public Ross course, Winnapaug Country Club in Westerly, Rhode Island.  Winnapaug was designed in 1922 and is one of those courses that falls into the "good bones" category of Ross courses.  It has not been well preserved but you can still see the potential. 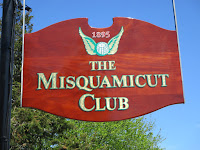 The final course on Day two was the course that this entire trip was planned around, The Misquamicut Club in Watch Hill, Rhode Island.  Misquamicut was re-designed by Ross in 1923.  Misquamicut has a significant architectural pedigree.  Golden Age architects Willie Park Jr, Tom Bendelow, and Seth Raynor all worked on the course before Ross completed his re-design.  Misquamicut is a course I have been trying to play for 15 years.  The season at Misquamicut is very short and I have been in the area a couple times too early (late April) or too late (October) in the season to have the opportunity to play it.  The course was well worth the wait.  Misquamicut is one of the most fun golf courses I have ever played!


Day three began at Agawam Hunt Club in Rumford, Rhode Island.  Agawam is a 1911 Ross re-design and is a hodgepodge of different architects and features one of the most unique routings I have ever seen.  You literally drive through a garage, down a driveway and across a busy street to get to and from holes 8 through 14. 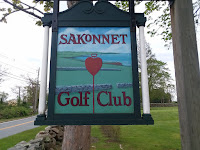 The second course I played on day three was Sakonnet Golf Club in Little Compton, Rhode Island.  Ross designed Sakonnet in 1922 and spent many summers just down the road, and like Pinehurst #2, he constantly tinkered with his design.

The last course I played on day three was Point Judith Country Club in Narragansett, Rhode Island.  Donald Ross re-designed nine holes at Point Judith in 1927.  The front nine is very much a links course while most of the back nine is in the trees.


My final thought on this trip is that I continue to be amazed at how good Ross was at routing a golf course.  I saw a wide variety of property on the trip and every single time Ross was able to route a course that maximized the land.   During the trip a friend called me and we were having a conversation about the modern minimalist architects and how even though their courses are great you eventually start to see a lot of sameness in their designs.  That is not the case with Donald Ross.  I played nine courses he designed or re-designed and I never saw the same thing.  He is truly the greatest.