Every year I try to take a trip to someplace I've never been and immerse myself in the golf courses of that area.  In 2017 that trip was to Iowa, state #46 in my quest to play golf in all 50 states.  I used my time well on this trip, playing 11 courses in five days.  While I did manage to hit most of the high points in Iowa, I wouldn't mind returning in the future.  The golf is very good.

My trip began at a course ranked in all of the various Top 100 Public courses list, The Harvester Golf Club in Rhodes, Iowa.  The Harvester was a great place to start my trip and I was very impressed by the course.  Keith Foster does great work renovating other people's courses, but this original design may be his best.  The property features great topography with elevation changes that do not feel as dramatic as you think they should be.  If you put The Harvester in California or Florida it would easily be ranked in the top 25 public courses in the country every year, but because it is located 30 minutes Northeast of Des Moines it will never get the attention it deserves. 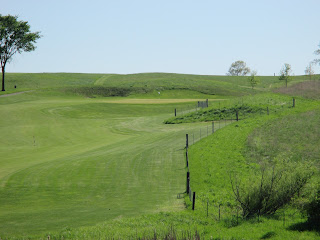 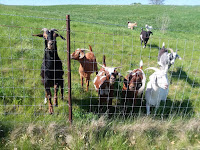 The OB is pretty severe on the 11th Hole. The goats on the other side of the fence were very friendly.  Golfers must feed them quite a bit because they ran over to me as soon as I got near the fence.


Day two of the trip began at Spirit Hollow Golf Course in Burlington, Iowa.  Spirit Hollow was designed by Rick Jacobson. I have played several Jacobson designs in the Middle Atlantic and this is by far his best course.  Jacobson has continued to tweak the course over the years, constantly trying to improve it.  I saw new tee boxes, adjusted fairway lines, and new bunkers while I was playing.  It's refreshing to see an ownership that is always striving to improve their course.


The second course on day two was Blue Top Ridge at Riverside Casino in Riverside, Iowa.  Blue Top Ridge was designed by Rees Jones and as always, he did a very good job of using the topography to give you a pleasant course that gives amble room off the tee.  I was particularly impressed by the long par 4's.


The third course on day two was Finkbine Golf Course in Iowa City.  Finkbine is the golf course for The University of Iowa and was designed by Robert Harris in the 50's.  Finkbine was a decent course with some good holes.  The thing I remember most was the unique double island green par 3 on the back nine.

Day three of the trip began with a very pleasant surprise, Amana Colonies Golf Club in Amana, Iowa.  Amana was designed by William Spear in the late 80's.  I was shocked by the elevation changes.  I didn't realize it was possible to have a mountain course in Iowa, but that is exactly what this is.  It suffers from the same problems all mountain courses do; very tight in places, tough to hold fairways on severe elevations changes, but it is also very well designed.  The architect understood that players would be hitting from lots of uneven lies and gave you plenty of room around the greens.


Cedar Rapids Country Club, designed by Donald Ross was next up on day three.  Cedar Rapids was restored by Ron Prichard, a Donald Ross restoration expert.  Ron did a great job at bringing back the strategic bunkering and undulating greens that we love in our Ross courses.  Similar to the next course I played on this day, Davenport Country Club, Cedar Rapids solidly belongs in the top 100 rankings.  Unfortunately, it's location means that it will likely never get enough raters to be considered.


The third course on day three was Davenport Country Club in Davenport, Iowa.  I have already written a blog post about Davenport, link is below.  I will emphasize that Davenport is one of the best courses in the mid-west and belongs in the Top 50 golf courses in the country.
Davenport Blog Post 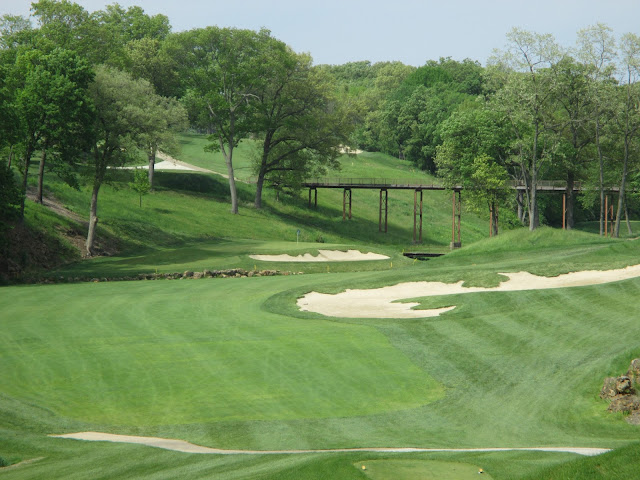 Day four of the trip began with a sizable detour to the Chicago area to play Old Elm Club in Highland Park, Illinois.  Old Elm was designed by Harry Colt and built by Donald Ross.  Drew Rogers recently did an excellent renovation that recaptured the Colt feel.  The routing of the course hasn't changed one bit since it was built.  Old Elm is a Men's club and I know people are divided about the issue.  I will say that the vibe at Old Elm is one of the coolest I have ever seen.  They have a ping pong table in the golf shop.  Why?  Because they can.  The locker room is old fashioned and sensible and every single person you run into is laid back and friendly.

The last day of the trip began with the only Tom Fazio course in the state of Iowa, Glen Oaks Country Club in West Des Moines.  Glen Oaks is in the middle of making improvements to the course but even with a few temporary holes, it was still a very enjoyable course.

The last round on the trip was the Langford & Moreau designed Wakonda Club.  Wakonda is a classic course that is fun to play and could really benefit from a proper restoration.  Tree removal, bunker restoration and green expansion could make this course one of the best.  The course hosts the Senior Tour in May which is why you will see bleachers in some of the photos.