My wife and I ultimately want to relocate to the Phoenix/Scottsdale area in the next few years and my recent trip to the area reminded me why.  I had not been to the area in nine years and really enjoyed my time in the Valley of the Sun.  A side trip to Palm Springs to play an almost bucket list course made the trip that much better.

The trip began right off the plane with the Chiricahua course at Desert Mountain Club.  Desert Mountain is a humongous development located in Carefree, north of Scottsdale.  It is home to six Jack Nicklaus designed courses.  Chiricahua is considered by many to be the best of the six, so it was a great way to kick off my visit to AZ.

On day two of my trip I headed down to the Tucson area.  I began the day at the Canyon course at Ventana Canyon Resort designed by Tom Fazio.  The setup at Ventana Canyon is one of the more unusual I have ever seen.  The resort clubhouse is over a mile from the first tee of the two courses, but you do finish at the resort clubhouse when you play the Canyon course.  The drive from nine to ten on the Canyon is also well over a mile, making it one of the more interesting routings I have ever seen.

My day in the Tucson area continued at The Gallery Golf Club.  I played the South course at The Gallery when I visited in 2012, and now it was time to tackle the North course.  Both courses were designed by Tom Lehman and John Fought.  I really enjoyed the firm & fast conditions on the North, which allowed for some reachable par 5's and almost drivable par 4's.

Day three brought a sunrise round at the Founders course at Verrado Golf Club in the western suburbs of Phoenix.  My round at Founders was interesting for one big reason.  As I mentioned, I had the first tee time of the day and I was paired with three other players.  I am standing on my tee box waiting when all of a sudden, a couple and another guy come flying by me trailed by the starter in his cart.  They ignored me even though they could clearly see I was standing there with my driver ready to hit.  The two guys go right up to the their tee box farther up and proceed to hit.  I put my driver away and drive up to them.
I tell the starter I'm playing with these people and he says "Oh yeah, I guess you are."  He begrudgingly tells them that I'm playing with them and the husband of the couple says to me "Well we like to play fast, is that going to be a problem?"
Now let me stop here.  If you are reading this blog, then you probably know that I'm one of the fastest players on planet earth.  There are lots of things that I do on the golf course that speed others up.  I'm aware of these things and am very careful not to do them with people I don't know.
So in that moment when he said that, Satin flashed across my face and I replied, "No problem at all."  I decided to let it all out.  I did everything that I normally don't do with strangers to speed them up.   The four of us played the front nine in an hour and fifteen minutes.  Several times on the front there were three balls rolling on the green at the same time.  They tried to get me to go ahead of them after about five holes but I said I couldn't because I would catch the maintenance crew.
We finally caught maintenance on eleven.  The single guy walks over to me and says, "You know we have been playing here together for years and this is by far the fastest we have ever played and you are the fastest player we've ever seen."  I just smiled at him and said "Guess playing fast isn't a problem for me huh?"  I finished the round in two hours and thirty minutes.  I say I because they didn't finish with me.  The seventeenth hole is a par three with water down the right side, and one of the guys says, "We like to fish balls out of the water here and it being Monday after a busy weekend there should be plenty so you go ahead, we'll be several minutes." So that ended one of the more interesting experiences I have had in the last few years.
If they had bothered to stop on the first tee, allowed me to hit when they knew I was playing with them and playing several tees behind them, made any attempt to introduce themselves or act like they weren't put out by having me in the group, then they wouldn't have spent the entire round moving in fast forward because they didn't want to back down from the challenge of the guy playing faster than they were.


After my brisk morning round, I made the three-and-a-half hour drive to Palm Springs for an afternoon round at Desert Willow Resort designed by Michael Hurdzdan and Dana Fry.


My four course day in Palm Springs began at The Classic Club, an Arnold Palmer design that hosted the PGA Tour's Palm Springs event in the mid-2000's.  The course is fairly isolated for the Palm Springs area, on the North side of the interstate.


I had some time to kill after my speedy round at Classic, so I headed over to The Lights at Indio for a quick walk around nine of the eighteen par three holes.  I believe this was the third lighted par three course that I have played, but I have only actually got to do one under the lights.
I headed down to La Quinta for my next round at a place that I have been trying to play for over ten years, The Quarry at La Quinta designed by Tom Fazio.  The Quarry is an early 90's Fazio design that I believe is one of his best.  The topography of the course is incredible and the way he used the elevation is something that I haven't seen from him in the over one hundred of his courses I have played at this point.

I finished my day in the Coachella valley with a round at the ten hole short course at The Quarry at La Quinta.  This was the 2nd ten hole course I have played along with the short course at Pine Valley.  This course featured some of the most dramatic views on the property.

I returned to Arizona for my last day of the trip.  The theme of outstanding Fazio work continued with The Estancia Club in Scottsdale.  Estancia is another mid 90's Fazio design that sits right at the base of Pinnacle Peak.  Hikers of the peak are treated to a bird's eye view of the front nine at Estancia when they make the climb.  You hear conversations from the hikers on the Peak when you play the sixth and seventh holes.


I returned to Desert Mountain in Carefree for my last rounds of the trip.  First I played the brand new #7 course, an eighteen hole par three course that features a sand tee on every hole so members can practice their bunker play!  Every hole was also built so that it could be played with a putter from the forward tee.
The last round of the trip took place at the one of a kind Renegade course at Desert Mountain.  Renegade is unique because it has two flags on every hole, often on separate greens.  The easier White flag and much harder Yellow flag offer members a multitude of options.  A recent renovation to the course increased the number of separate greens.  I played to the harder yellow flags, but am anxious to return for a round at the white flags! 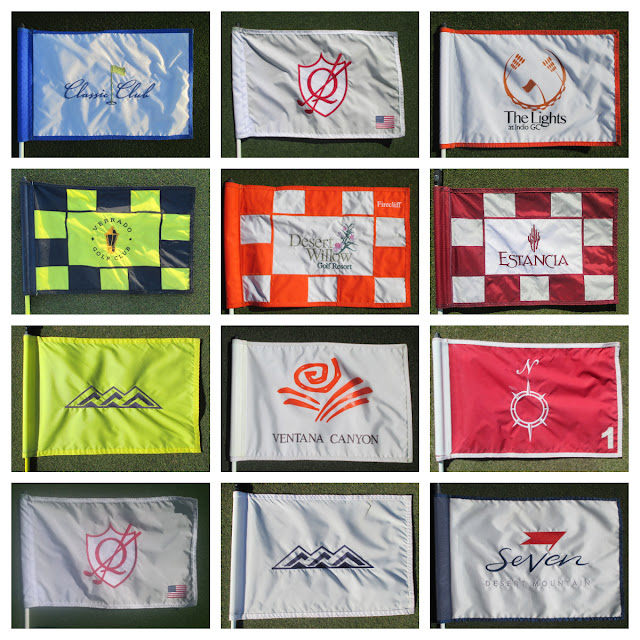 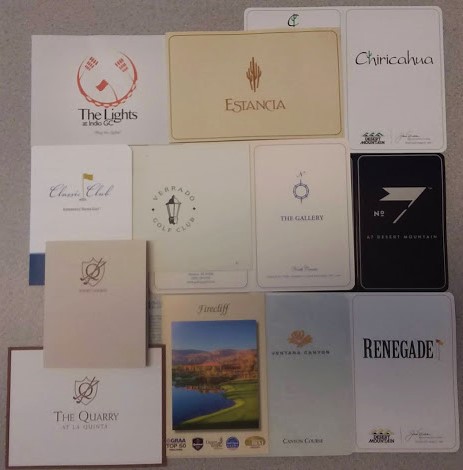