In the Spring of 2016 I decided to do a quick four day trip to the New York area to play several courses I never got the chance to play when I lived much closer to the area.  A quick non-stop flight from Charlotte to Newark made the trip very easy and I plan on returning to the area many more times in the future.  Although I have played the majority of the "ranked" courses in the greater New York City area, I haven't even come close to playing all the great courses the area has to offer.

After landing at Newark, I headed to Stony Point, New York for a warm-up round at Patriot Hills Golf Club.  This beautifully undulating piece of property was designed by Rick Jacobson.  I am very familiar with Jacobson's work as he designed several high-end public courses in Northern Virginia where I grew up.  As usual, he delivered a solid product with very enjoyable holes.

After a fun warm up round at Patriot, I made a 30 minute drive around the Hudson River to Hudson National Golf Club in Croton on Hudson, New York.  This exclusive high-end private course was designed by Tom Fazio and is one of his most well known designs.  The course moves well with the elevation and features many nice views of the river. 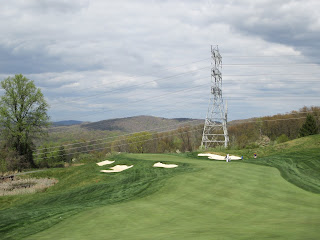 Little funny story about the picture to the right here, which is the long par 4 3rd hole.  I was shocked when I saw the high tension power lines behind the green as the view beyond the wires is beautiful and I wouldn't expect such a high-end golf course to have something as unsightly as high tension wires behind a hole.  I asked the members I was playing with about this and they told me the club did look into moving/burying these high tension wires, but the cost would be several million dollars.  So with that knowledge, everybody can look at the wires for one hole!


Day two of my New York area trip began at the very under-rated Paramount Country Club in New City, New York.  The course was designed by A.W. Tillinghast and has a ton of character.  It has everything you love about Tillinghast, deep bunkers, bold contours, interesting greens.  The course has benefited from restoration work over the years.

After the round at Paramount, I headed out to The Hamptons for a round at Southampton Golf Club, in Southampton, New York.  I have played all of Southampton's more famous neighbors over the years but had never had a chance to play this lovely Seth Raynor design.


Day three of my trip began in Stamford, Connecticut at Sterling Farms Golf Course.  This town owned course is a 1966 Geoffrey Cornish design.  Not knowing much about the course, I was pleasantly surprised.  The course was in very good shape and played surprisingly firm with all the rain the previous day.


The second course I played on day three was Pound Ridge Golf Club in Pound Ridge, New York.  This Pete & PB Dye design is one of those where you want to bring plenty of golf balls and have a sense of humor.  I imagine the property did not lend itself well to golf and it was a major undertaking just to get the golf course built.


Day three of the trip was the only day where I was able to play three courses and because of the overcast, foggy weather, I was able to play 54 holes at three separate courses in just over six hours!  The final course on day three was the highlight of the trip, Tamarack Country Club in Greenwich, Connecticut.  This Charles Banks design features all of the great MacDonald/Raynor/Banks template holes.  The templates at Tamarack were very good.  Yale may have the best Biarritz, but Tamarack's could be a close second.


Day four of my brief trip brought more rain but could not dampen my spirits because I started the day with the wonderful Wykagyl Country Club in New Rochelle, New York.  The course was originally designed by Lawrence Van Etten in 1905 but has been modified over the years by many architects including Donald Ross, A.W. Tillinghast, and most recently Coore/Crenshaw.  Wykagyl is one of the best courses in the New York area and is overshadowed by its more famous neighbors.


The last course I played on my brief trip was Essex County Country Club in West Orange, New Jersey.  This unique design features seven holes designed by A.W. Tillinghast, one through six and nine, and eleven holes designed by Seth Raynor and completed by Charles Banks after Raynor's death.