My annual trip with my wife is normally to someplace we've never been that includes a National Park and lots of great golf.  Unexpected changes this year had us scrapping our original plan to vacation out West and looking for alternatives closer to home.  When an opportunity came up to play a course in The Hamptons that I've never played came up, my wonderful wife agreed to make our annual vacation a road trip to Long Island.  My wife had never been to Long Island and really enjoyed her time in The Hamptons.  We got lucky with the weather and had an outstanding trip.
So why does a blog post about a NY road trip begin and end with golf courses in Virginia?  Basically because we needed to break up the drive, and I, in my quest to play every golf course worked on by Donald Ross, always find ways to work in his courses that are anywhere near our route.  That's why our trip began in Richmond at Belmont Golf Course, former host of the PGA Championship won by Sam Snead.  The course is one of a handful of courses that has been worked on by both Donald Ross and A.W. Tillinghast.  Belmont is one of those courses that falls into the "good bones" category.  With a comprehensive restoration, it could be one of the best municipal courses in the country, but that is not likely to happen based on their current plans to remove most of the bunkers.
Our road trip continued with a round at the last course designed by the great Pete Dye, The Links at Perry Cabin in St. Michaels, Maryland.  Perry Cabin is a renovation of an older course.  Pete's son P.B. was the builder, and I was a little worried about that since PB is not known for play-ability.  I was pleasantly surprised to see that the first few holes allowed you to ease into the round with wide fairways and generous greens.  As usual for Pete, the angles were outstanding.

After our early morning round in St. Michaels we headed to nearby Easton, Maryland for a round at Talbot Country Club designed by Ed Ault.  Talbot began life as a nine hole course on a very small piece of property that is currently home to the 5th, 6th, 12th, and 13th holes.  Most of the property where the current course sits was a tree farm, and you can still see an occasional specimen tree during your round.
Our proper New York adventure began in Bridgehampton with a round at the Rees Jones designed
The Bridge Golf Club.  The Bridge was designed on the old Bridgehampton speedway and the owner very smartly kept racing as the theme, leaving many speedway relics around the property and including racing as the theme of the clubhouse.

Our first day in NY continued at Seth Raynor's first solo design, Westhampton Country Club.  After building several courses for his mentor, CB MacDonald, this was Raynor's first design without input from the father of American golf.  It contains the templates you find in all of his designs, and the par threes are exceptional.
Our second full day in NY started in the North Fork of Long Island, home to over 40 vineyards and a recently discovered Donald Ross course.  Before we tackled it, our day began at the appropriately named The Vineyards Golf Club in Riverhead.  The course was designed in 2005 by Buddy Johnson and crams a lot of good golf into a small piece of property.
Following a pleasant morning round in Riverhead, we headed 15 miles East to Cutchogue for a round at the Donald Ross designed North Fork Country Club.  Recent work by the Donald Ross Society has established that this course was designed by Ross in 1912.  While it is not exactly as it was back then, you can still find the wonderful greens and magnificent routing that you can see in all great Ross courses.
Our final round of the day saw the only unpleasant weather we dealt with on the trip.  Despite the drizzle and a stiff breeze, we had a great time walking the nine hole Quogue Field Club in East Quogue.  Golf has been played at the Field Club since 1900.  Recent research indicates that what remains today was designed by Tom Bendelow.
The idea for this trip began when I was given an opportunity to play a golf course that has haunted me for fifteen years.  I had a tee time at Atlantic in 2004 but had to cancel.  Since, I have tried and failed to play the course every time I got anywhere near New York.  I was not going to pass up an opportunity to finally play what many consider Rees Jones' best golf course.  Atlantic is in Bridgehampton and has seen recent bunker renovations by Andrew Green, (who has become very popular in the restoration field).  Atlantic was one of his first projects, and I applaud the job he did.  The bunkers look great and have wonderful variety.
We departed The Hamptons after our morning at Atlantic and headed West on the Long Island Expressway towards Western Long Island.  We stopped off in Huntington to experience the Devereux Emmet designed Huntington Country Club.  Overshadowed by the big name courses on Long Island, Huntington had the great benefit of being tweaked by Emmet over the years and is now seeing a long term restoration by Ian Andrew.
Our last day on Long Island began at the Seth Raynor designed North Shore Country Club in Glen Head.  A recent renovation by Tom Doak restored some of the best elements of the design while creating some new holes with a Raynor theme.
After our round we made the short drive to Oyster Bay for a visit to the wonderful Planting Fields Arboretum.  Whenever my wife and I take a trip, we always try to find gardens or scenic hikes along our route, and we were fortunate to find the Arboretum that started life as the estate of William Robertson Coe.
A mere three miles from Planting Fields in Glen Cove was our next destination: Nassau Country Club.  Nassau has a diverse history of architects with Golden Age luminaries Herbert Strong, Devereux Emmet, and Seth Raynor contributing to the design.  The routing is primarily Strong and as a result the course is probably the most underrated on Long Island.
On our last day in the greater NY area, we made the drive across the George Washington Bridge to New Jersey for a round at one of the most unique facilities in golf, Montclair Golf Club.  Montclair has four nines, numbered 1,2,3, and 4.  The first three were designed by Donald Ross, and the fourth nine was designed by Charles Bank, a disciple of MacDonald and Raynor. The Ross nines have some of the wildest greens I have ever seen.  I applaud Montclair for not softening these amazing greens in this era of modern green speeds.  Our original plan was to play the 2nd and 4th nines per a recommendation from the starter, but a great pace allowed us to experience the 1st nine as well.
The opportunity to play three of the four nines at Montclair brought up an interesting question about how I count these as golf courses played.  Montclair is the only course in existence that has four nines that can be played in any combination.  The club, at least in the fall, doesn't have a predetermined rotation and allows you to start wherever you want and then rotate wherever you want. When I solicited feedback on how many golf courses Montclair should be counted as with their unique four nine setup, people said 1, 2, 4, and 6!  I ended up counting it as two courses because in my mind four nines equals thirty-six unique holes which is two courses, but there is no right answer about how many courses it counts as to each individual.
Our last round in the greater New York area was at another wonderful Ross design: Crestmont Country Club in West Orange.  As an aside, this small area around West Orange might be the biggest hotbed of Golden Age Architecture in the entire world. In two square miles you have wonderful designs from A.W. Tillinghast, Charles Banks, Donald Ross, Seth Raynor, and Willie Park Jr! 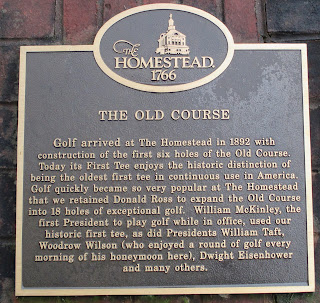 Our trip ended where it began, in Virginia.  This time we were in the mountains enjoying the peak fall foliage and a round at the Donald Ross designed Old course at The Homestead Resort. The course features the oldest continually used first tee in America and a great scoring opportunity with six Par 5's!  Sadly I didn't take take advantage of this as much as I wanted.  I blame the cold weather!
SCORECARDS 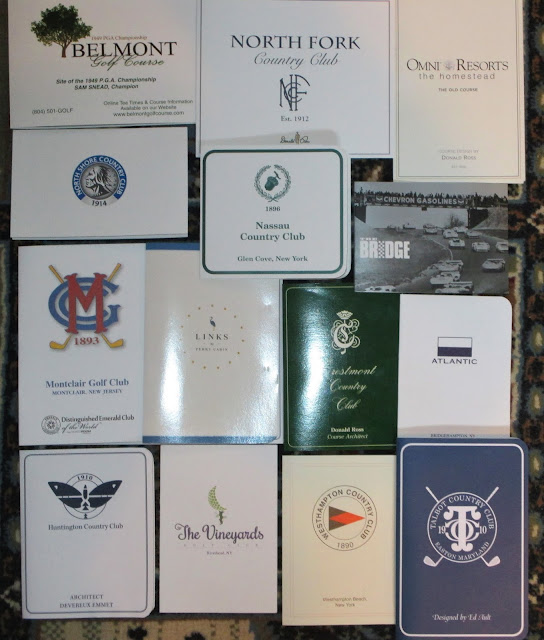 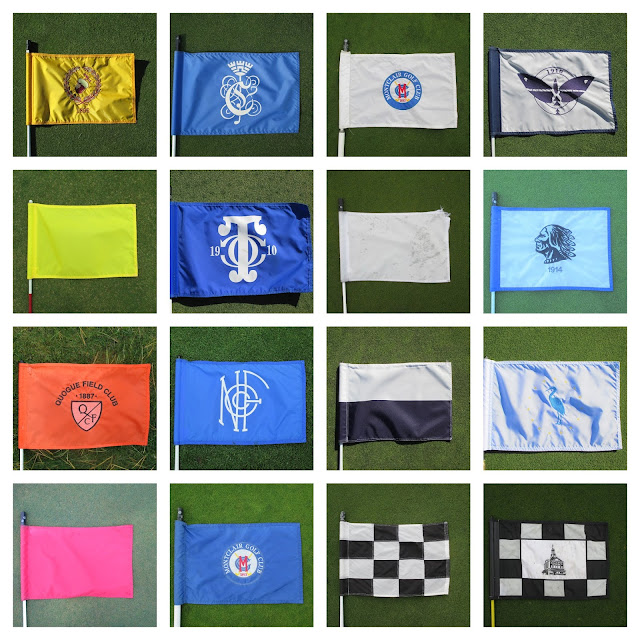 That's a wrap on our big trip for 2019.  I was thrilled that my wife enjoyed The Hamptons so much.  She is eager to get back, despite dragging her down the roads around Southhampton and droning on and on about NGLA and Shinnecock.  When I stopped the car on a public road to snap a couple pictures of two of my favorite courses, she remained calm, even when I was basically trespassing walking onto the hallowed property, she didn't ask me what I was doing.  She understands my madness and that is one of the reasons I am so lucky to have her.