The theme of my year has been "Unexpected change".  Given that, I should have expected that my trip to Colorado would bring many unexpected changes. This time it was due to a random snow storm and extremely cold temperatures.  While my buddy and I enjoyed the sunshine and temperatures in the low 80's during our first two days in Denver, it was hard to believe that on the third day we would only see a high of 30 degrees with 3 inches of snow!

Right off of the plane, our trip began at the Tom Weiskopf designed Ridge at Castle Pines North in Castle Rock.   Time only allowed us to play the front nine, which is a real shame because everybody told us the back nine was the better side.
With our warm up round completed we headed to the town of Parker to play The Club at Pradera designed by Jim Engh.  Engh has a very distinctive style that makes him a "love or hate" architect.  Pradera was the first Engh design for my buddy.  One of the most frustrating and also exciting things about Engh designs is that bad shots sometime end up very good while precise shots can end up very badly.  Such is the nature of Engh designs.
Day two began at one of the highlights of the trip: Commonground Golf Club which was masterly renovated in 2013 by Tom Doak for the Colorado Golf Association.  Every student of architecture should see Commonground as an example of how to build a course that can challenge the low handicappers yet still provide a fun and fair test to the higher handicap players.  Commonground will be a "must play" every time I travel to Denver and it should be a must play for you.
After our pleasant walk around Commonground we checked out the Par 3 course.  With all holes under 100 yards, it's a great place to work on your short game.
With my goal of playing every golf course worked on by Donald Ross, our afternoon round on day two was the Tom Bendelow designed and Donald Ross renovated Lakewood Country Club in Denver.  Very close to town and on a tight piece of property, this wonderful, classic design features many fantastic greens (as one would expect from the master of greens design).
Our plans changed significantly after our round at Lakewood.  Our original plan was to drive out to Northeastern Colorado for a day at Ballyneal, but with a forecast for snow and a high around 30 we headed South towards New Mexico for a day in Santa Fe.  We made the right call. While it was snowing in Denver, we were enjoying the sun and temperatures in the high 60's in Santa Fe.  Our day began with a wonderful hidden gem, Santa Fe Country Club, designed by Tom Bendelow.
After a great early morning walk around Santa Fe we headed to The Club at Las Campanas, which features two Jack Nicklaus designed courses from the 1990's.  We started with the Sunset course, which is the harder of the two courses.
Our day in Santa Fe finished with the Sunrise at Las Campanas.  Sunrise is the more scenic of the two courses at the facility and has returning nines. 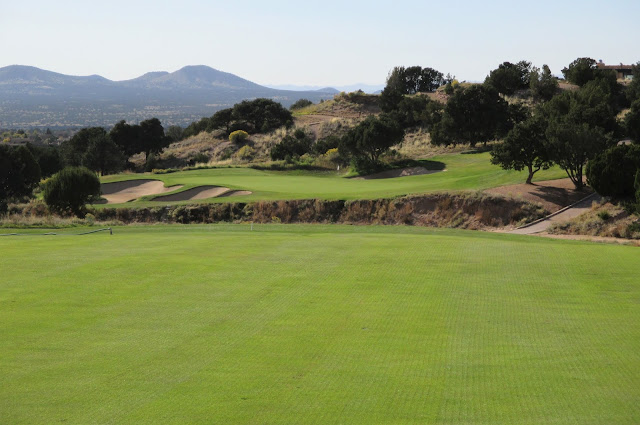 Day four began with a white knuckle drive over the Independence Pass in the Rocky Mountains.  I'm a Southerner and suck at driving with snow on the ground so I wasn't thrilled to see snow on a mountain pass.  Obviously, we survived and began our first day in the mountains at Ironbridge Golf Club in Carbondale.  This unique course was designed by Arthur Hills and renovated by Tom Lehman in recent years.  After playing the first fourteen holes you embark on a 3/4 mile drive to reach the final four holes on a dramatic piece of property in a canyon.
We had to call another audible on our first of three days in the Vail/Aspen area of the Rocky Mountains due to the snow.  I learned a lot about the micro-climates of Colorado and didn't realize that even though Aspen and Carbondale are twenty miles apart, the weather can vary greatly in the two.  While Carbondale received no snow, Aspen received several inches.  We had to scrap our afternoon round in Aspen and instead stayed in the Carbondale area for a round at the Jack Nicklaus designed Aspen Glen Club.
Our second day in the Vail area of the Rocky Mountains began at the Jim Engh designed Lakota Canyon Ranch Golf Club in New Castle.  Lakota has been on various top 100 public lists over the years and I can see why.  While Engh can be a controversial designer, he succeeded by routing the nines through canyons and maximizing play-ability for such a challenging site.
Our afternoon round gave us the biggest surprise of the trip and one of the biggest surprises I have ever encountered on the golf course, Frost Creek Club in Eagle.  In playing over 1600 golf courses, I can honestly say Frost Creek has one of the most beautiful sites for golf I have ever seen.  Everywhere I looked, I was amazed at the beauty.  Tom Weiskopf did a masterful job of maximizing the potential of the site.  The course is essentially three different courses.  The first few holes are in the valley and featuress very little elevation change.  The middle holes climb a ridge and are on the most dramatic property.  The course ends on the lower part of the property near the creek where Weiskopf used extreme creativity to sustain the high level of interest created by the middle part of the course.
On the sixth day of our trip began, we were supposed to play the Norman course at Red Sky but snow cover had us looking for alternatives.  Somebody we played with at Aspen Glen suggested The Sonnenalp Club in Edwards so we headed there. This design collaboration between Bob Cupp and Jay Morrish has some of the fastest greens in Colorado.
Our weekend concluded with a round at one of the four golf courses at the Club at Cordillera.  We teed it up at the Tom Fazio designed Valley course in Edwards which is the only one of the four courses still open in October.  The other courses at Cordillera close in September because they are set at higher elevations.
Our last day of the trip we finally returned to the Denver area and began at the Donald Ross designed Wellshire Golf Course.  A lengthy frost delay at this Denver Municipal course provided tons of entertainment while we waited patiently for our turn to tee off.  We sat in the pro shop during the delay and enjoyed listening to the shock and anger of customers as they found out about the frost.  We even heard my all-time favorite response:  "Well there is no frost in my yard!"
The last round of the trip was also the biggest highlight of the trip, the historic William Flynn designed Cherry Hills Country Club.  Host to major championships and most recently a World Golf Championship, Cherry Hills oozes history from its classic design.  My buddy and I both spent lots of time in the Philadelphia area where most of William Flynn's portfolio exists so we were very excited to play one of his most noteworthy designs in the elevation of Denver.  The course did not disappoint.
Before we tackled the big course at Cherry Hills, we had a pleasant walk around the Par 3 course which was built in the 1960's by Press Maxwell, son of legendary designer Perry Maxwell.  The trademark Maxwell bunkering is fully evident on the course! 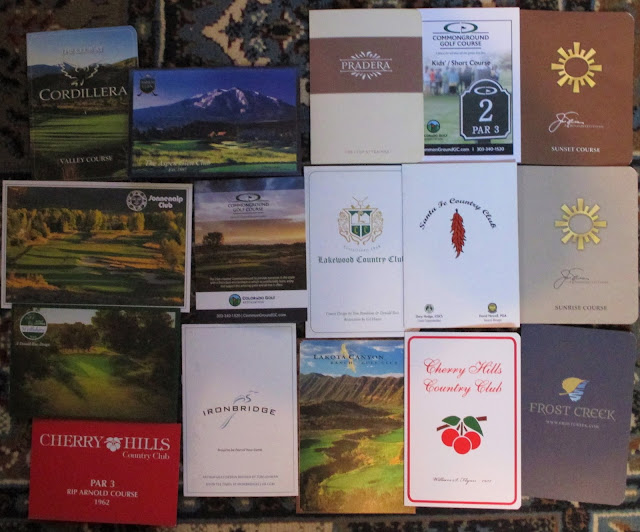