My 2019 semi-annual trip to Florida was a little earlier in the season than in previous years.  I took advantage of this scheduling change to play PGA National, a course that I hadn't been able to play in previous years because of the PGA Tour tournament.  The experience at PGA was one of many highlights of the trip but the weather was the real star.  On my only day in Palm Beach Gardens the temperature reached 94 degrees.  Consistent temperatures in the high 70's and low 80's had me wondering why I left Florida to return home to the rain and cold.


First up on the trip after an eight hour drive was the National course at ChampionsGate Resort South of Orlando.  Both courses at ChampionsGate were designed by Greg Norman with the National being a more American style course and the International being more like a links course.  I have played several Norman designs and this is by far the most playable and least aggressive design I have seen.  Norman courses usually have bold bunkering and are very difficult, but that wasn't the case at ChampionsGate.  I'm sure it was a conscious decision because the clientele at the resort is more of the higher handicap variety.

Day two of the trip began at the Donald Ross designed Fort Myers Country Club.  I had some concern about the course when I heard that Steve Smyers recently did a renovation.  Smyers is not a Ross restoration expert and I feared that he had gotten rid of some of the Ross features.  I was happy to discover that besides a couple holes on the back, Smyers did a great job of restoring Ross features and recapturing lost green space.


My day in Fort Myers continued at Cypress Lake Country Club.  This Dick Wilson design was recently renovated by Ron Forse & Jim Nagle.  I have played many courses renovated by these guys and I know they always do great work.  That was further proven the following day at Country Club of Orlando!  Cypress Lake features the bunkering Wilson is known for and has a great set of par 3's.


On the drive back to Lakeland from Fort Myers we stopped in at Streamsong Resort to play a quick sunset round at The Roundabout.  This unique course is an exciting seven-hole par three course designed by Gil Hanse when he designed the Black course at Streamsong.  The genius of the design at The Roundabout is that it can also serve as an alternate 9th hole on the Black course since the Black doesn't return to the clubhouse after nine.  I really wanted to play this course because 2019 is setting up to be the year of the odd numbered golf course for me.  Plans are in place to play courses with 8, 11, 12, 21, and 22 holes to add to the courses I have played with 6, 9, 10, 18, 19, and 20 holes.  Obviously I play a lot of courses so I am always on the lookout for something unique and different.

The third day of the trip brought a visit to the Orlando area and began at The Country Club of Orlando. CCO is another great renovation job by the aforementioned Forse & Nagle.  They renovated the course in a Donald Ross style.  There are no plans or proof that the course was designed by Ross and research from some Ross experts implies that the course was most likely designed by Tom Bendelow.  Forse & Nagle did a magnificent job and CCO is now the best course in the Orlando area in my opinion.

My day in Orlando continued at another Tom Bendelow design, Dubsdread Golf Club.  Designed in 1924, the course was renovated in 2008 by local Florida architect Mike Dasher.  I had an enjoyable walk despite the 85 degree temperature and the group behind us hitting into us, which made for an interesting confrontation between me and the guy who hit into me.  You never want to hit into somebody early in the round on a busy day because you're going to see them on practically every tee the rest of the day! 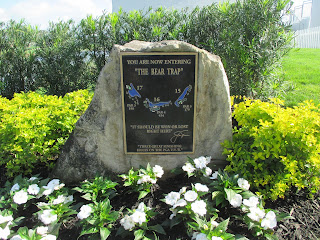 Day four brought a long awaited visit to PGA National in Palm Beach Gardens.  The Champion course was hosting the PGA Tour's Honda Classic ten days after I played it.  This was the first time I have ever played a course that close to a tournament.  It was a very interesting experience.  Long rough and extremely firm greens took some getting used to but I managed to play pretty well when I started hitting fairways.


My day in the Palm Beach Gardens area continued at the 54 hole Club at Ibis and the newly renovated Legend course.  This challenging layout was originally designed and renovated by Nicklaus Design.  The three members I played with were very helpful in telling me about the renovation.  It was clear the goal was to make the course more of a championship layout.  I was very impressed by the pace, and on a very busy day our foursome played in three and a half hours.  I noticed most groups, including ours, were leaving the pin in on almost every putt.  Further proof in my mind that it really does help with pace of play if an entire group is open to leaving it in.


In my quest to play every course designed by Donald Ross I made a stop on the way home at Keystone Golf & Country Club in Keystone Heights.  This nine-hole course is of the mom and pop variety and has a devoted local following.  I had a very enjoyable walk across a nice piece of property.