The major theme of 2019 was change and opportunity.  That theme continued in an unexpected way into 2020 with my improvised trip to Southern California.  At the end of 2019, I had planned on traveling to Houston in early 2020 but a change of events had me looking for alternative destinations.  The most obvious destination to me was Southern California, but only if I could get on a few of the bigger name courses in the Los Angeles area that I had yet to play.  Through the help of some friends and very generous golf professionals, I was able to set up some places that had been on my bucket list for a very long time.

Before my trip even started, I was presented with a challenge that I turned into opportunity.  North Carolina was going to see a snow storm for the first time in 2 years on the day before I was scheduled to fly to Los Angeles.  The biggest course I was playing on the trip was scheduled right after I got off the plane on the first day.  A delay or cancellation would be disastrous.  I had to play that course on Friday or I wouldn't be able to play it at all.  Thankfully American Airlines gave me the opportunity to change my flight for no fee, so I flew out a day early with the blessing of my very generous boss.  This created an opportunity for me to play a course I had always wanted to check out: Saticoy Country Club in Oxnard.  Located about an hour north of Los Angeles, Saticoy is a 1960's design that has seen recent bunker work by Thad Layton.
Day two of my trip was in Los Angeles and began at Rancho Park's Par 3 course.  Designed in 1948 by William Johnson and Billy Bell, the par 3 is a nice compliment to the regulation course and makes great use of  a tight piece of property.
My day continued in the Los Angeles area at another golf course, and that's all I can say.  Here's a possibly random sign. 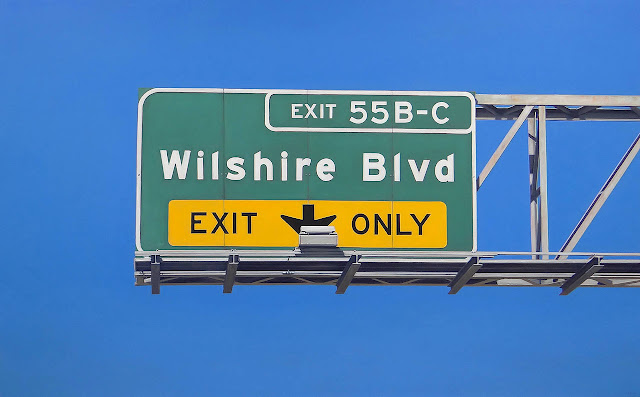 On the third day of my trip, I headed South to the San Diego area for a day of the best courses in the area.  My day began at the recently renovated North course at Torrey Pines.  Renovated last year by Tom Weiskopf, the North has always been the lesser of the two courses at the facility, and the major goal of the renovation was to make the course tougher.  I never saw the old version, but the locals I played with said that Weiskopf succeeded in a big way.

A tremendous storm blew in as we were standing on the 15th tee, the drop-shot signature par three on the North.  The wind was blowing 30+ mph and it was raining sideways.  My playing partners sought shelter and said they were going to stop until the storm subsided.  I kept going (insert Caddyshack rain reference here) and hit 3 wood to the fringe of a downhill 170 yard par three!  I finished and, because it was still raining and no one else wanted to tee off, I was able to get right out on the South course, which gave me more time to play the third course of the day.
I headed over to next year's US Open venue: the South course at Torrey Pines, and had to endure a few holes in the rain before I was rewarded with plentiful sunshine for the rest of the day.
My third course on day three was my first Max Behr design: Rancho Santa Fe Country Club.  Despite the course being walking only and me being on my third round of the day, I managed to play most of a very enjoyable golf course.
My second day in the greater San Diego area began at the long time PGA tour host La Costa Resort & Spa and their Champions course.  My one memory of the course was in 1996 when Tiger and Tom Lehman faced a sudden death playoff in the rain, and Tiger hit it to a foot on the 1st playoff hole, the par three 16th Hole.
The second course I played on day four was a course I had heard a lot about and was very excited to see: Goat Hill Park in Oceanside.  Goat Hill Park is a feel good story where Links Soul founder John Ashworth and many other locals saved the course from extinction.  The Park is a real community gathering place now where people can bring their dogs with them when they play and also play disc golf alongside people playing real golf.
The last round on day four was a bucket list round at Bel-Air Country Club.  A George Thomas design recently renovated by Tom Doak, Bel-Air is a triumph of engineering as much as golf design.  The course was routed through several canyons and requires the use of three tunnels and an elevator to play the course!  I loved everything about the design.  While not long, it is extremely challenging and forces you to place your drive in the proper spot to give you a chance at birdie.
Here are two pictures that tell a cool story about my experience at Bel-Air.  The first picture is looking back down the 18th hole with the 17th green in the background.  Notice the tennis courts on the right side of the picture. 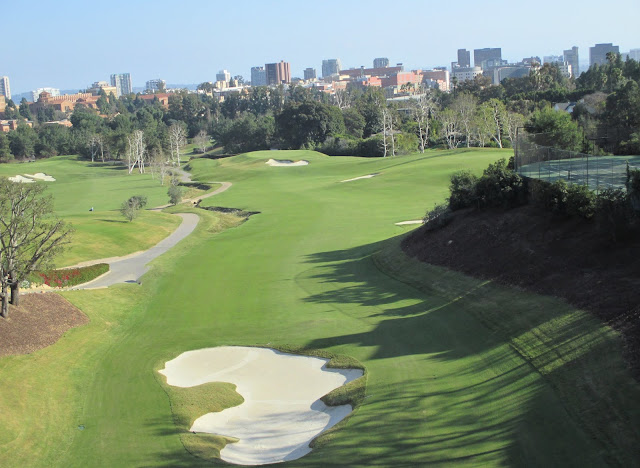 The 2nd picture below shows where my drive on 18 ended up after I snap hooked it into the 17th fairway.  185 yards away and my only option to get on the green was to hit it over the tennis courts!  My oh so helpful caddy felt the need to point out that if I pulled my shot I would hit a 15 million dollar house(top left corner of picture) with plenty of windows and lots of witnesses!  Seizing the moment, I hit 4 iron right over the tennis courts (fence to the right of the house) to about 20 feet.  A very memorable moment on a very memorable course! 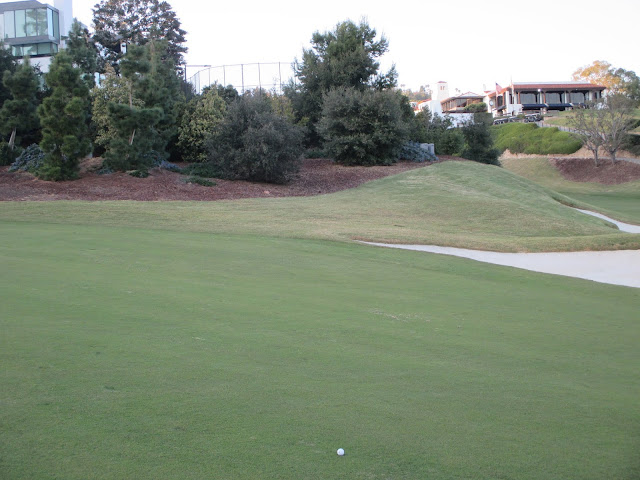 After my round at Bel-Air, I headed East to the Palm Springs area.  I began my first day in the desert with the most famous course in the area: The Stadium course at PGA West.  The current final round host of the Bob Hope PGA Tour Tournament is famous for its rock encircled version of the 17th at Sawgrass, also designed by Pete Dye.

The PGA West theme continued at the Nicklaus Private course for my second round on day five.  A very bold and difficult layout, the private course really forces you to execute with precision or suffer the consequences.
The final round of my first day in the Palm Springs area came at the Pete Dye designed Mountain course at La Quinta Resort.  I was paired with three other singles and, though that can be a problem sometimes, we got along very well.  Thankfully none of them felt the need to move back to play my tee, which happens way too much.
The last day of my trip began at the Nicklaus Tournament course at PGA West.  A little more playable than the Private course.

The only thing that really didn't work out well on the trip was my second round at the PGA West Private Courses.  I made a tee time on the Palmer Private course and was very excited to play the course where David Duval eagled the 18th hole to shoot 59 at the Bob Hope.  When I arrived that morning I was told my tee time had been moved to the Nicklaus course, which I had played the day before.  I ended up getting out on the Weiskopf course but didn't get to play the Palmer.

The last course I played on the trip was The Madison Club in La Quinta.  Designed by Tom Fazio, Madison is a super high end Discovery Land Property.  If you are not familiar with Discovery Land properties, they are known for their high end "comfort stations"  If you are looking for a golf course where you can get soft serve ice cream and beef jerky on the 5th hole, Discovery Land courses are the place to be! 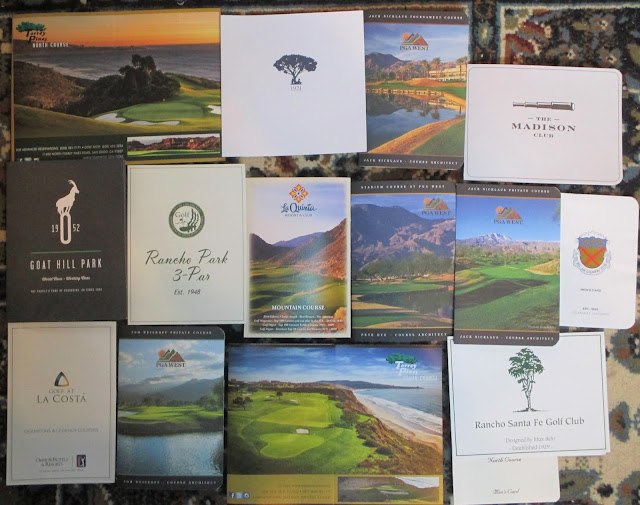 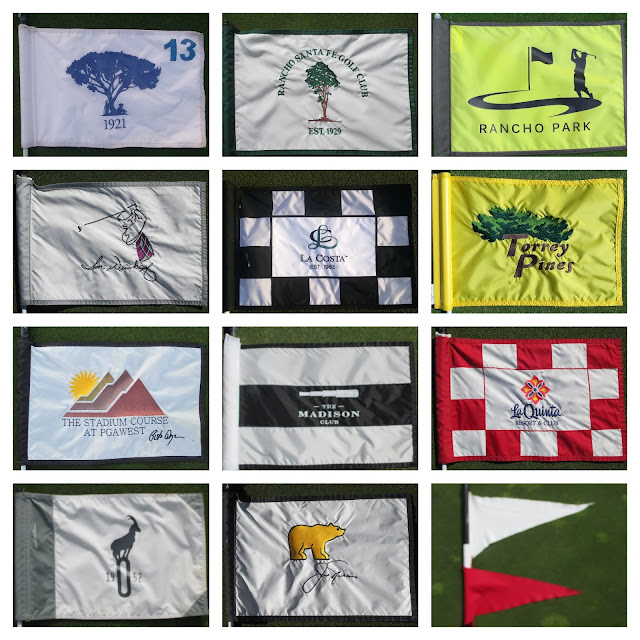 So that's a wrap on my bucket list trip to Southern California.  With everything currently going on, I feel extremely fortunate I was able to have this experience when I did.  I don't even want to think what would happen if my trip were a month later.  As usual a big thanks to all those that helped make this happen.  I am very grateful for the kindness of my fellow PGA Professionals and my friends that help me make my golf dreams come true.
at April 15, 2020